by infused exposures on November 9, 2011 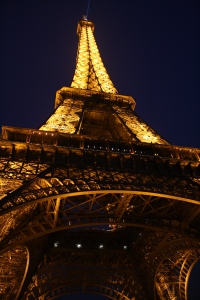 Stories always start with a beginning and move through to the ending.  But often (if not always) the story starts somewhere else.  Stories come with many different origins.  And so it’s true with this story.  This is the beginning of the story that this blog will tell.  This story starts here with these words in the present moment as it’s emerging and unfolding each day.  But the real beginning started sometime else.

In December 2008, my impulsiveness got the best of me and I decided to fly to Paris to celebrate the new year there.  The city of lights, the Eiffel Tower, baguettes, strolling along the Champs Elysees.  Paris has always conjured up the typical romantic notions and I thought that it might be a nice place to start a new year.  I had hoped it would be a new year filled with positive changes, something that I really needed that year.

2 weeks before December 31st, 2008 on a night clouded by (maybe) a bit too much wine,  I purchased the ticket.   Now I would go for sure; that definitive moment when the arrow on your computer determines your fate.   But where to stay?  Hotels, prices were extraordinary.  Out of the question.  Time was not on my side, with less than 2 weeks until my departure, so I decided to try couchsurfing.   Couchsurfing is an organisation with an idealistic philosophy; a philosophy that might save the world if more people could embrace it.   I had belonged to it for some time and had hosted wonderful people but never made use of it for myself.  Now was the time.  I sent out some emails to people hoping for a response.  Most of the time I got nothing and if I did, everyone was sorry but they were already busy.  2 days before my departure, I had no place to stay.  Things were looking grim for my spontaneous adventure.

That evening I received an email from a kind soul who offered me a place to stay, but added that there would be many people staying with him and his friend as well.  Unsure of going abroad surrounded by strangers,  I consulted with a friend who pointed out that a large group of people may be a fun way to ring in the new year.  She had a point and so I agreed.  I arrived to Paris the morning of December 31st and took the train to a station just on the outskirts of the city center.  I got stuck in the train station turnstile because I bought the wrong ticket.  Waiting on the other side, was Laurent, who was my couchsurfing host.  He explained to the woman behind the ticket counter what I had done as I stood  there helpless.   We spent the next week together as friends.  Now he is my boyfriend.   This is the start of the story.

There was a total of 15 of us strangers for that new year, some of who are still friends today.  My trip ended up being extended, due to a bizarre snow storm in Paris, that closed  the entire Charles de Gaulle airport.  I couldn’t get a flight back home for 3 days.  I called my job from the airport to inform them. Then I called Laurent to tell him I was stuck.  I immediately took a train back to Paris and we spent the next 3 days together.  This was the beginning for us. 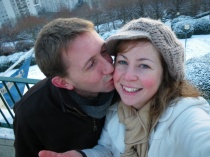 We had a lot in common.  We were both infected with wanderlust.  Laurent so much so, that he had sold his business to travel the world.  He already had plans to cross Canada for the coming year.  We talked about meeting up in Canada and crossing parts together.  It was whimsical talk to plan and dream but irresistable  It was all a bit intoxicating.  A romantic new years in Paris and now talks of these future adventures.  I went back to NYC, still caught up with all these emotions and ideas.  Laurent visited me 1 month later in NYC.  I returned to France that year in April and that summer we actually did all those things we talked about on those Paris nights.

This new years marks 3 years.  3 years that have taken me to places I only dreamed of…Patagonia, every province in Canada, Hawaii, Alaska, Iceland, London and back and forth all over France to the US.  This is where the new story starts.  The beginning of this blog and what will come after.

Starting in June, shortly before my 38th birthday, we will embark on a new way of life.  I will be selling my possessions to travel with Laurent for 2 years through South and Central America.   For the past 6 years, I have lived my life to travel.  I work  just to save enough money to go someplace new, then return home to do it all over again.  This time, I will travel and work as I am moving around from place to place.

This trip will not be purely for pleasure.  We will take immersion classes for Spanish shortly after our arrival.  We are looking into volunteer opportunities in several countries that we will visit.  Most of all, we will be taking photographs for our books.  We will make books about our travel.   About the food, the culture and the different landscapes.

It’s all very exciting, just like those first talks we had.  It’s also scary and as much as I’m excited, I’m scared too.   This is the beginning.