We arrived to Tigre, Argentina on our first morning.  We weren’t really supposed to go to Tigre.  We were going to go out about 2 hours to the Pampas, to an older city with a long history of gaucho culture (gauchos are the south american version of cowboys).  But we were so tired from our travels and the supervolcano that took place before the travels, that we decided to go to a city closer.  We had read about Tigre and it’s proximity to Buenos Aires and how nice it was.  So we decided to go.

The train ride there was one big blur.  We were beyond exhausted.  Tigre is situated about 17 miles north of Buenos Aires and  it takes about an hour to go by train. You can take the train right from Retiro (which is the central station in Buenos Aires).  It’s very easy.  In one of our guide books, we read about a B & B that was close by the train station. It got good reviews and since it was so close and we were so tired, we decided to try there to see if they had a room available. Since it was early morning (around 9 am) we thought we might have to wait for a long time to check into a room.  And with no reservation we were slightly worried that they wouldn’t have room at all.  Well, we couldn’t have been more wrong! 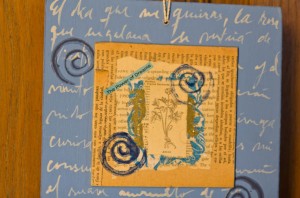 We were instantly greeted by a friendly woman who spoke wonderful English.  She saw how exhausted we were,  told us she had a room right away and led us around her beautiful mansion house.  I felt like I had come home.  She took us upstairs to a room that had a name on the door.  “The power of dreams” was the room she put us in.  Really?!  How perfect, I thought, for I felt like I was dreaming.  She practically tucked us into our big, comfy bed.  Our room was a dream, with ceilings that went up to the sky, lots of light and doors that opened up to a huge terrace where palm trees swayed and we could look out onto the flower filled garden.  The name of this magical place was Casona la Ruchi, please read our complete review.

We slept.  Oh boy, did we sleep.  I think we woke up around 4:30 and decided to go out to explore our new city after taking much needed  showers.  Tigre, whose name means tigers, was named for the tigers that were once hunted here many years ago.  The city sits on the Paraná Delta.  So basically it is situated around these milk chocolate colored canals.  The canals are interconnected and used to serve as an important port where Europeans would bring wood and fruit to the area.  Today it still serves as important port for wood and timber.   But nowadays it’s more of a retreat for Porteños (citizens of Buenos Aires).  They arrive during the weekends especially, bringing a buzz of life to Tigre.  Charming, mahogoney colored wooden taxis take them to their vacation houses (many of which are up on stilts).  Tourists can also take these taxis to reach restaurants, B & B’s and even camping.  Tourism is quite prevalent and you can take kayak trips through the narrow waterways or even hire a private company to sail you through.  There is a wonderful market, Pureto de Frutos where locals make all kinds of things to sell, there is also fresh fruits to buy and many cute cafes to take a bite to eat.

We did not venture out on the waterways.  Our purpose in Tigre was just to relax and we happened to discover its beauty by accident.  Instead, we strolled along the riverside under a canopy of wisteria that flowed down from old trestles.  Flowers filled the air and my body felt almost shocked by the greenery and flowers!  We left New York in prime autumn where apples and pumpkins were ubiquitous and leaves in hues of yellow and red were just beginning their annual ritual of floating through the crisp air.  South America is opposite of North America in terms of seasons and so they are just beginning their spring equinox.    It’s very weird to go from fall to spring!  Flowers filled the air, smelling of spring everywhere.  Friends gathered on nearby bright green patches of grass, drinking mate from gourds of all sizes and materials.  Couples made out on park benches (displays of affection are certainly welcomed in this city!) Indeed, mate drinking and public displays of affection were as numerous as the flowers!  Our walk ended at the sublime museum of art just as the sun was setting. 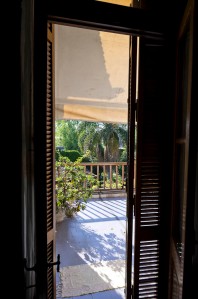 We also spent a lot of time in our mansion B & B, especially sitting out on the terrace watching the palm trees and working on this blog.  We spoke with the hosts of the house and met lovely Dora, who proudly showed us her old stove and her kitchen.  She makes the dulce de leche from scratch and the orange marmalade, as well as the bread that’s baked fresh every morning that made up a big part of the breakfast that was included in our stay. All of it was exceptional.  I love to know what other people are eating for breakfast and so I was excited to come down for breakfast on our first morning.  It’s a very basic affair.  Lots of breads, some crunchy like toasts and some soft accompanied by different spreads: butter, this cream cheese type thing but better, orange marmalade and of course, dulce de leche.  Tea and coffee round it all out.

Dinner, however, is anything but simple!  The breakfast is so light so you can really go to town on dinner.  The famous Argentinian beef is king.  It’s really everywhere and it really is all that.  Our first dinner was a somewhat sordid affair.  We went on the recommendation of our B & B host, we wanted something inexpensive and good.  The food was edible but the place itself was so bizarre!  It was so brightly lit, it was almost blinding.  Stained tablecloths and dirty silverwhere, you get the picture I’m sure.  Perhaps what was most strange was the ‘windows’ that instead of opening up on the streets, were instead open to a gymnasium where we could watch children running around as we ate our substandard pasta and drank lousy wine.  The place served mostly pasta and some beef too, which is very typical Argentinian fare.  The Italians left a big influence here so you can find pasta and pizza (some of it excellent quality) everywhere.

Our next night we decided to try something a bit more upscale.  We were craving the beef.  This wasn’t a parrilla which are places that typically serve asado but they had plenty of beef on the menu.  We ordered the beef de lomo, which is known in the US as the tenderloin.  Laurent ordered it with a malbec sauce, which was carmelized to perfection and married wonderfully with the meat.  Mine was in a pepper sauce, with big chunks of peppercorns dotting the creamy, meaty flavored sauce.  We downed a bottle of Malbec (the wine that is made in nearby Mendoza, Argentina’s wine country).  My first bite of this meat gave me chillls.  I had to put down my fork and savor each chew.  And this is coming from a former vegetarian!  It’s that good!  We were tempted to order another one for dessert.  You simply cannot get enough of it.  We opted instead for a decent but not exceptional chocolate mousse.  Check out our complete review of this restaurant.

We ended up spending a total of two nights in lovely Tigre.  Most of it spent just taking time to adjust to our new way of life and appreciating the things around us.  It was a perfect way to start our journey.

If you want to see all our photos from Tigre, click here.