Dulce de leche, empanadas, milanesas and more meat! An introduction to the foods of Argentina 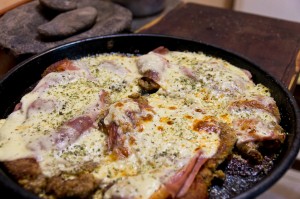 I am so behind in writing my posts!  We had some technical difficulties with connections and honestly, we spent a lot of time just relaxing.  As I write this, we are still in Uruguay but will be leaving tomorrow to head back to Buenos Aires for two more days.  We spent an amazing time here and I really fell in love with this country.  But more on that later, for now I want to tell you all about some of the foods I tried in Buenos Aires before too much more time passes!

Soon after our precarious start in BA, we started on a new path to the gastronomical treasures that lie in the country.  Only a few hours after we arrived we were already indulging in one of Buneos Aires’ legendary steakhouses, devouring more of the countries succulent beef.  But even before that, we got a glimpse into what was to come for us, food-wise.

On just about every street corner so it seems, you can find the local Panaderias.  These are the bakeries in Argentina.  As ubiquitous as the Starbucks are in Manhattan, so are these wonderful places.  The only other city I can remember seeing so many bakeries everywhere is of course, Paris.  Buenos Aires is often dubbed the Paris of South America and you can find it in the architecture, the attitude of the people and yes, of course, the bakeries.

I was slightly suspicious of the Panaderia.  Everything looked quite good but I wasn’t sure how it would taste.  Well, let’s put it this way; I could easily marry a Panaderia and we could spend the rest of our lives in dulce de leche, flaky paradise.  Yes, the Panaderias are all that and then some.  Fresh, full of quality and flakiness and of course dulce de leche, it’s difficult to be disappointed here.  I was equally enamored to find the pao de queijo’s long lost cousin, the chipa, sitting here on the shelves.  There it sat, unsuspecting and staring at me, it’s exterior shrouding it’s cheesy insides all to itself.  I ordered one quickly, went home to warm it up and oh my god….I think it might have been even better than the pao de queijo! 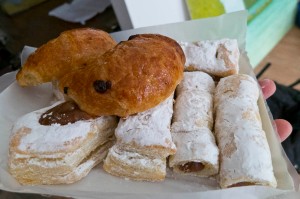 Most other things in the Panaderia that I tried were all fantastic.  Even their version of croissants, the ever present medialuna (which means half moon-so cute!).  It’s no Parisian croissant but it’s got it’s own distinct flavor and while not as light as a croissant, it’s very satisfying with a cup of cafe con leche.  Most things in the Panaderia all have dulce de leche tucked inside somewhere.  Some of the pastries have it proudly displayed on top, or you can sometimes see it oozing out from the sides.  But even when you think you’ve found something dulce de leche-less, about midway through eating it, you can see a small strip, spread inside!  They just can’t help themselves, disguising it like that. It’s a national treat here in Argentina, and no where can you get it better than an alfajore.  Alfajores are like the Argentinian oreo.  Two cookies sandwiched with dulce de leche inside and dusted lightly with flaky coconut on the outside. Sometimes indulgently covered in chocolate.  Yum.

Buenos Aires is teeming with numerous cafes and restaurants, all of them look worthy of trying out, there seems to be an individual appeal to each one.  I didn’t know where to begin!!  But of course, I delved into my research like a scientist discovering a cure for a disease.  For our first night in BA, we had to eat more beef.  I wanted to try a traditional parilla and we did pass many windows with cows tied up and being slowly turned over wood coals.  Instead, I ended up with La Cabrera and I’ve since found out that it’s a rite of passage for all tourists.  Think of what Peter Luger’s is to NYC and you can get the picture.  Yes, it’s expensive, a bit touristic but who really cares when the meat is that good.  You can read the full review of the restaurant here.  Let’s just say, the beef did not disappoint.

Empanadas.  Just like the beef and the bakeries, you can find empanadas everywhere in Argentina and especially in BA.  I’ve had empanadas before in the USA.  And I’ve liked them.  But they are different here.  The dough is much thinner and lighter, producing an almost flaky empanada.  It’s almost as if they use a puff-pastry dough to achieve that lightness.  The empanadas come in every size and shape imaginable and usually you can tell what’s inside from it’s shape outside.  The fillings are delicious, especially the common carne version, which has-yup, you guessed it.  More beef.  We were lucky enough to take an empanada making class for ourselves but more on that later.

We stayed in a hostel our first night in BA and then we moved on to a week filled with staying at different couchsurfers.  Our first couchsurfer was an amazing host (well, they were all amazing) but this one was very special.  She was also a chef and intimately knew of the foods of Argentina.  Within an hour at her house, I was already perusing a huge cookbook about all the traditional foods in Argentina.  Seeing as she liked to cook so much, I asked her if she would like to cook together and she agreed.  And so on the second night of staying there, we prepared a very traditional milanesa napolitana. 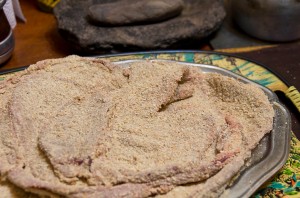 You might think it’s an Italian dish from Milan or Naples, and yes it’s true, milanesa’s are another gift the Italian immigrants brought over to Argentina, along with their pizza and pasta. Milanesa simply refers to the process of dipping the meat in egg, breading it and then frying it. But the dish milanesa napolitana was actually invented in Argentina at a pizza restaurant called “Napoli”.  We know the milanesa in the USA too but it’s under the different name of parmesean.  As in chicken or eggplant parmesean but here, the milanesa is prepared with beef and pounded very thin.  It’s more akin to veal parmesean or veal schnitzel or what we call chicken fried steak.   But with milanesa napolitana you top the fried piece of meat with just a little tomato sauce, a thin slice of ham and a lot of cheese.  Finish with a touch of oregano, serve with some potatoes and you’ve got yourself a full milanesa napolitana platter.  It was delicious and much lighter and crunchier than any chicken or eggplant parmesean I’ve ever had.  I discovered the key to making a great milanesa is pounding the meat very thin and really pushing the bread crumbs into the meat.  Stay tuned for a recipe.

As with the milanesa, the Italians also brought pizza and pasta.  You can find these everywhere in Argentina and it’s much different than what we have in the US.  Sure we can get fresh pasta at specialty markets but here, you can find fresh pasta everywhere.  In neighborhoods like Recoleta in BA, a walk along the tree lined streets reveals countless shops where you can see old men pulling huge sheets of fresh pasta.  You can go in and buy your fresh pasta and choose your homemade sauce, pick up a bottle of wine and voila, you’ve got yourself an amazing Italian dinner. 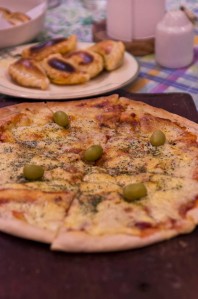 Pizza also deserves a special mention, you can find as many pizza places here as there are in NYC. But unlike NYC, where you have to go to the trendy places to get pizza cooked in a wood fired oven, pretty much everywhere here uses this kind of oven.  The toppings are usually top notch, the crust is thin and delicious, with the same slight chewiness of NY pizza.  The only thing that lacks is the cheese.  The cheese on Argentina pizza’s and even what we used to top the milanesa with, is a cheaper version of mozzarella.  It melts wonderfully, however but it lacks in flavor.  But still, the pizza was very good in BA.  But BA has nothing on Uruguayan pizza which can rival NY’s best.  More on that later though!

One last thing that I have to mention is the ice cream.  Yes, I know what you are thinking.  Pizza, pasta and ice cream….what is so original about these things?  But trust me people….the ice cream is the best I have ever tasted in my life.  And I’ve tasted many an amazing ice cream.  They have about 10 different flavors devoted strictly to dulce de leche!  And a host of other flavors in categories of chocolate, fruits and creams. They have a flavor where the ice cream itself is dulce de leche and then they have the real dulce de leche mixed inside it!!!  Of course I had to try it and oh my god…dulce de leche heaven.  One of our couchsurfers took us to Persicco, which is supposed to be one of the best in BA.  I think it may be the best in the world!  Porteños (the residents of BA-meaning people of the port) love ice cream so much that they even have guys on small motor bikes to deliver it to your door!  That’s right, ice cream delivery people!!  With all the delivery of all things in NYC, why hasn’t ice cream caught on?!  After every bite I took, I put my spoon down to reflect on its creamy texture and perfect flavor.  I still dream about it.

So this was my introduction to Argentinian foods.  There is still over two months worth more to come.  Stay tuned!  Next, I will tell you a bit about the unique drinks in Argentina.