Discovering Jupiter and our inner gaucho in Cordoba

by infused exposures on November 9, 2012

Did you know you all have an inner gaucho?  Well you do and I recently discovered mine.   In case you don’t know, gauchos are the South American version of the North American cowboy.  Riding over the pampas on their horse with no name, the nomadic gauchos lived their lives by hunting cattle.  Much like the cowboys, guachos were thought to be the honest, strong, silent types, but proud and capable of violence when necessary.  Gauchos often carried a faćon (ginormous, sharp knife) tucked into their pockets and they used only their faćon for eating.  They ate, almost exclusively, meat.  Even though I am a former vegetarian, I long to be a gaucho.  Waving around my faćon, eating my beef and laying in the sun.  I finally had the chance.

We arrived to Cordoba by the night bus from Buenos Aires.  Another successful night bus journey, we were refreshed and ready to start the day.  To any of you reading this who are traveling around, take the night buses!  You save money on accommodation for the night and you can sleep really well! We decided to couchsurf for the week while we were in Cordoba to continue to get to know people from Argentina.

Cordoba is the second largest city in Argentina.  It has about 1.3 million people living in the city and most of the city is quite compact and easily walkable, which is good because there is no metro here.  First thing you notice about Cordoba is the beautiful Spanish colonial architecture:

Second thing is that it’s full of students, there are numerous universities here so there are plently of students walking around and where there are students, there are bars.  So yes, Cordoba enjoys a good nightlife.  There is a strong police presence in Cordoba (more so than any other city we visited in Argentina)  and I felt very safe in this city, even late at night.  The churches in Cordoba are all incredible.  There are countless churches due to the early Jesuit settlers.  The surrounding area in Cordoba hosts many Jesuit settlements called reductions that you can visit easily by a short bus ride.

The cathedral by night:

We were lucky enough to find two amazing couchsurfing hosts to stay with the whole week we were here.  I just cannot say enough good things about couchsurfing.  I have had the best experiences doing this.   We took the taxi right from the bus station to the first guys house.  For those of you traveling around like we are, it’s very good practice to just take a taxi when you arrive at a bus station, instead of walking with your big backpacks down unfamiliar streets.  Taxis are really cheap (averaging around $8)  so it’s worth the extra pesos to feel safe.

Our first host was simply amazing.  He felt like a long lost brother.  We instantly clicked and within a half hour we were all drinking mate around his kitchen table.  Since he was an astronomer, he had access to the observatory in Cordoba.  We were treated to a view of all the stars you can’t see in Orion’s belt with a naked eye, a full moon and Jupiter!  What a first night!

A shot of the moon on just a tripod:

And then through the huge telescope: 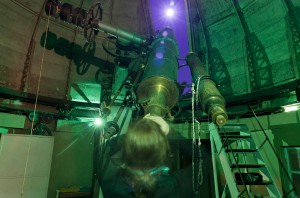 A few days later, he suggested we all go on an overnight camping trip nearby to waterfalls.  For dinner, we brought what else?  Yes, meat.  There were several places to pitch your tent and spaces to build a fire.  Argentines do not camp without an asado.  In case you didn’t read my last posts, an asado is a super huge BBQ and it along with maté, futbol and family is part of what defines Argentina.

Our kind host thought that there would be a parilla already in place (in essence, what we know as a grill for BBQ).  Sadly, there was no parilla for us to use.  What would a gaucho do in this situation?  If you guessed make his own parilla, you are right and that’s exactly what we did.  Laurent and our resourceful host set to work making one out of fresh branches and rope I had brought.   It worked amazingly!!

We feasted on the delicious meat and drank lots of vino tinto. 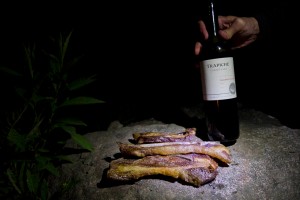 We camped out that night and it felt so good to be back in the tent.  It is the first time we have camped and hiked with the backpack so far and jeez are we out of shape!  It was more difficult than I remember!  But it’s good practice for when we go to Patagonia.

The next day pretty much sucked.  We had a pretty glimpse of the waterfall but then it began to pour like crazy!  We got soaking wet and then had to sit on the bus back to Cordoba all soggy and wet.  It was well worth the rain though, to have had a night of the gaucho.

The next days we spent with another couchsurfer, who was also an amazing host.  We prepared an asado, not in the gaucho way but this time more modern. We had fantastic views of Cordoba and the meat was equally as delicious!  We drank more maté and watched the futbol game on television.  Not so gaucho but very Argentinian. 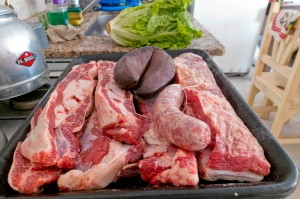 We photographed the churches by night and enjoyed tango in the square near the cathedral.  Every Saturday night from 9 pm til 2 am, you can watch people or join in dancing tango in San Martin square.  It was absolutely beautiful to watch everyone dancing under the stars with the big cathedral as a backdrop.

I loved my stay over the week in Cordoba.  Mostly because of the generosity of our couchsurfers and also because I feel like I am understanding more about Argentinian people and culture.  The city is also so laid back and overall very friendly, so this helps make it very likable too.  It’s been just over a month that Laurent & I have been on the road and I am feeling very lucky and grateful to be doing this.  People in Argentina don’t have it so easy.  The guys I met love to travel as much as I do but it’s not so easy for them.  The rate of pay is very low in Argentina and they are experiencing much economic turmoil.  I feel almost guilty to have this opportunity.  My friends and family back home have much to deal with in the wake of the recent hurricane.  I feel so helpless for them over here.  Between the helpless feeling and the guilt I feel when I see the poverty on a daily basis here, I am feeling an enormous amount of gratitude and thanking each one of my lucky stars.

I wish everyone could see the world too.  It’s truly amazing to see the landscapes and meet the people that make every place so unique (and of course, taste the foods).  Maybe one day, you too can travel around and discover the gaucho that lies within all of us.