From quinoa filets to llama stew….exploring the foods of the Andean Argentinian northwest

by infused exposures on December 2, 2012

So we didn’t just road trip our way through the northwest snapping photos of the amazing scenery.  We also ate.  A lot.  Prior to our journey, I had read about the unique cuisine of the Andean north of Argentina.  So I knew to expect specialties like humitas, tamales, llama stews and other hearty dishes like locro and carbonada.  While visiting this region, I made it a point to try all of these local dishes, as well as take notes comparing empanadas from Tucuman up to Salta (very different in style).  It was a difficult task but a tasty one that I was certainly up for!

We were still in Argentina, so all the usual suspects were still here.  You could smell the Asado (bbq) wafting through the air throughout all the provinces, espcially on Sundays when families typically gather together for this tradition.  Dulce de leche and alafjores continued to advertise their sweet, gooey wares from every bakery window.  Milanesas were on the menu from small cafes to bigger, fancier restaurants.  Groups of friends gather to share their maté but I was very happy to discover new foods that Argentina had to offer too.

The northwest provinces consist of Jujuy, Catamarca, the west of Santiago del Estero, La Rioja, Tucumán and Salta.  Our road trip had us driving from Tucumán through Salta, so we covered most of those provinces. The Andes mountains are one of the main influences in the ingredients found here.  Quinoa, an ancient grain that is grown in the Andes, is recognized  in many of the dishes.  You can also find potatoes, corn and this being Argentina, a lot of meat.  In addition to the numerous cows grazing about, you will also see goats and llamas.

You can find Humitas throughout Argentina but in the north, they are found everywhere and are considered a local specialty.  Often they are wrapped up in corn husks, tied and steamed resembling tamales but sometimes you find them in a stew form.  The tender inside is made from corn mesa and whole pieces of corn, lending the humita a definitive, strong corn flavor and a sweetness.  Unwrapping the humita feels like opening a present.  You find a moist corn dough made by combining the corn mesa with milk giving it a creamy, soft texture.  Small pieces of corn are ground up and scattered throughout the humita.  Inside, is filled with scallions and melted cheese.  The corn and the sweetness are tempered by the slight saltiness of the oozing cheese.  The entire thing melts in your mouth with each bite and even though it’s very filling, they are so good I felt like I could easily eat two of them. 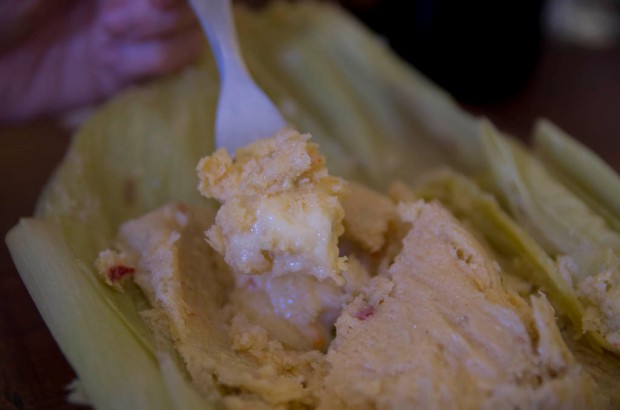 When most people think of tamales, they think of Mexican cuisine.  In the north of Argentina, tamales are quite popular and are found in many small cafes and bigger restaurants.  Like humitas, they are wrapped in corn husks, tied up and corn masa is used to make the dough around the tamales.  The difference between tamales and humitas lies in the use of whole pieces of corn; tamales do not use the big pieces of corn.  This results in a softer corn flavor which is not so sweet.  The filling is typically some type of ground meat, usually pork or beef.  What separates the Argentinian tamales from Mexican tamales is the spice level.  The Argentinian versions are much more bland and focused on the meat flavor as opposed to the use of spices.  This makes me prefer the Mexican kind because I like spicy but the meat is of such good quality in Argentina, these are worth a try.

Quinoa is an ancient Incan grain which thrives in conditions that the Andes mountains offers.  Technically, it’s not a true grain, as it’s not a member of the true grass family making it a cousin of  species like spinach or beets.  Densely nutritious, quinoa is often thought of as a “super food” by health conscious people mostly due to it’s almost complete set of essential amino acids (making it higher in protein than most other grains) and high quantities of iron and calcium.  Quinoa is extremely versatile for the cook, one can prepare it into breakfast cereals, use it as a salad base, add it to soups or in a milanesa form like we discovered in the northwest.  To make these tasty patties you start with cooked quinoa and mix it with flour and onions and spices if you like.  Then you dip it in egg and bread crumb and fry like you would for any milanesa.  The slight natural crunch of the quinoa coupled with the crunch from frying allowed for a textural explosion in your mouth.  Surprisingly delicious, it would make an admirable vegetarian entree.  I love quinoa and it’s versatility, so I liked these milanesas a lot.

Locro is a hearty stew made with potatoes, corn, white beans and of course, meats.  It’s very filling and thick and so it’s meant to be eaten in the winter.  I had a difficult time wanting to try locro because it was the beginning of summer when I visited the north and the days were usually about 85 degrees (F).  Finally, one night it got cool enough and I took advantage to try this tasty stew.  The meat they use in locro is usually beef (sometimes beef jerky), chorizo and sometimes you see tripe as well.  I’m not a fan of tripe, so I was lucky to try it made with just beef and chorizo.  The flavors of locro are very well developed due to its long cooking time.  Locro reminded me a lot cassoulet, which is found in Toulouse in France.  I think I still have some cassoulet in my belly, which I ate months ago.  And now the locro will sit there too.

Carbonada is another stew found frequently in the north of Argentina.  Like locro, it’s made with meat (usually just beef), potatoes and corn (usually left whole on the cob, cut in small rounds).  Unlike locro, sweet potatoes, peppers and apples or peaches are used.  Carbonada is not as thick as locro but it’s also a wintry food that is very hearty.  Sometimes a large pumpkin is hollowed out and cooked slightly and then it’s used as a vessel to serve the carbonada in.

As you drive through the Andean northwest of Argentina, you can’t help but notice large herds of goats, especially since, while driving, you often have to stop to let a herd go past.  All these goats everywhere mean one thing.  Good goats cheese.  Queso de cabra is exactly that.  Goat cheese.  Not the soft kind that I usually think about when I’m at home, instead this one is more firm with a subtle grassy flavor.  You can find it sold on the side of the road everywhere in the northwest, usually by old ladies selling it with pan casero (homemade bread).  You can also visit one of the factories where it’s made located in the wine region of Cafayate.  Cabras de Cafayate will give you a one hour tour and show you how goats cheese is made.  After the tour, you can sample the delicious products in it’s natural state or with added herbs or pepper.   The cheese is perfect when paired with pan casero, apple and the locally made Torrontés wine.

As mentioned with queso de cabra, pan casero is another thing that you find on the side of the road and even in the cities sold locally as street food.  Casero simply refers to the process of making anything homemade.  For example, if you see a sign for cerveza casero, it refers to homemade beer.  Pan casero is usually sold round and flat resembling a very thick pita bread.  It’s much more dense than pita and if you heat it in a pan with a little olive oil, it will make  a delicious accompaniment to queso de cabra. 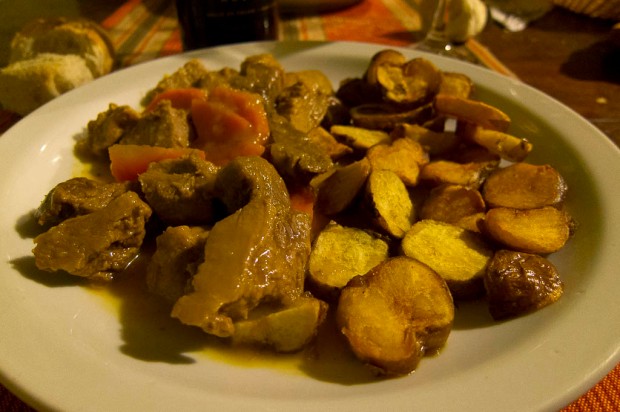 In addition to the herds of goats you see crossing the road, there are are also llamas found everywhere.  There are so many in the north, there are even road signs on the road warning you of their presence.  I never thought I would eat one, after all, they are kind of cute.  But after seeing it on the menu time and time again up in the northwest, I finally gave in and had to try this local specialty.  Originally the indegenious Quechua people hunted llama as a prime source of meat.  Today, it’s eaten widely through the region as a delicacy.  I was so surprised at how tender the meat was.  We ate it in several ways.  One was the lomo (the tender part) in roquefort sauce, one in a stew with a tomato base and another prepared simply with a brown gravy and served with potatoes (as you see pictured).  I expected the llama to taste gamey but on the contrary, it was quite mild.  The drawback to this meat I unfortunately discovered, is it can be prone to dryness.  One of the preparations we ate was too dry.  So take care if cooking the meat. 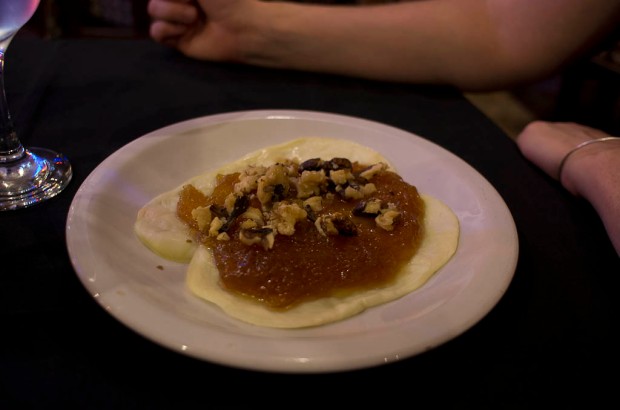 Quesillo y Memrillo is commonly seen on dessert (postre) menus of the northwest.  It’s cheese that is rolled fairly thin and then topped with membrillo, which is a paste made with quince.  Quince is a fruit that tastes a bit like a cross between a pear and an apple but that doesn’t really do it justice.  Quince has a life and flavor all its own.  Dulce de membrillo is a deliciously sweet paste made from quince, sugar and water cooked over a slow fire and you find it all over Argentina.  When in the north, it is most often combined with cheese and topped with nuts in this simple, yet delicious dessert.

Ahhh, empanadas.  We have tasted so many empanadas in our two months in Argentina.  You would think that it is a tired subject by now.  But when we traveled up north, we were pleasantly surprised to find out that the empanadas here are different.  And soon we were to learn that there are even differences within the north in empanadas.  Tucuman can lie some claim to fame in the empanada realm.  The national festival of empanadas is held in Tucuman in the town of Famailla.  Beef, mondongo (intestines) and chicken are usually the only varieties found here and they are most often cooked in some kind of fat (lard).  You won’t usually find potatoes, eggs or olives in the Tucuman preparation and often times they are served with slices of lime.

The empanadas we tasted in Salta were particular to the region.  Here they are known as salteñas.  Smaller and baked instead of cooked in oil, they had their own distinct flavor.  Instead of lime wedges, a tomato based salsa (sometimes more picante than others) was the usual accompaniment.  Often times the filling had the addition of green olives, potatoes and egg and sometimes green onion.  In the Salta province, we were afforded the opportunity  to try many empanadas some with more exotic combinations like pumpkin, onions, peppers and torrontés wine to chorizo, green olives and onions.  Overall, the empanadas in the Salta province tend to be more spiced than other places in Argentina.