A return to El Chalten & Patagonia, trekking around Fitz Roy with the worst tent ever!

by infused exposures on February 7, 2013

Three years ago, Laurent & I made a month long trip to Patagonia.  We trekked around Fitz Roy from the village of El Chalten for 3 days.  I never imagined that three years later, I would be lucky enough to be back in this incredible landscape.  But here I was. We arrived in El Chalten from Esquel via a truly terrible 27 hour bus ride (the route was from Esquel to Rio Gallegos to El Calafate to El Chalten on the dreaded Marga bus company).  It was the second week of December.

El Chalten is located in Parque Nacional Los Glaciares, in the Argentinian, southern part of Patagonia.  It is a trekkers paradise complete with various day hikes or you can string together some of the day hikes to turn them into multi-day treks.  There are different hikes/ treks for all ability levels and if you are a climber, getting to summit Mount Fitz Roy or Cerro Torre is a dream come true.  Mount Fitz Roy & Cerro Torre are the names of 2 of the largest peaks in this area.  El Chalten is the name of the town but it also refers to the mountains here.  In Spanish El Chalten means smoky mountain and often, when there are clouds around the top of Fitz Roy, it does indeed look just like smoke from a chimney.   In good weather, the views here are unbeatable.  You do not have to pay any fee to enter the park.

To get to El Chalten, the easiest way is to come through the nearby town of El Calafate.  It’s about a 3 hours bus ride (costing between 100 -150 Argentinian pesos (around $25 US).   If you are far away from El Calafate like we were, you will suffer on the bus.  You can also look into taking a plane with the budget airline LADE (prices are usually the same as the bus).

We remember on our last trip to this area that the bus always stopped at this lonely estancia (Leona’s) on the way to Chalten.  At this place, they had the most amazing, sky-high lemon meringue pie.  I don’t even like lemon meringue pie but you just have to try it when you see it.  It looks so good!  We couldn’t believe our eyes when the bus rolled into Leona’s and inside they had the same lemon meringue pie!  Still so good after 3 years:

Our plan in El Chalten was to continue training for our upcoming 7 day trek in Torres del Paine (which we planned to do after visiting El Chalten). When we visited El Chalten 3 years ago, we did this same exact trek.  It offers stunning scenery (especially in clear weather).  However, keep in mind that it is the most popular trek here, so if you are seeking solitude you might want to find another trek to hike.

We have a tent with us but unfortunately it is not a tent that could realistically be used in Patagonia.  Actually, it can´t even be used in the rain.  It doesn´t  even have a cover!  It’s kind of a summer tent.  Because of this, we planned on renting a tent in Patagonia.  We never rented a tent before and didn´t know how to go about it, so we went into the first place that we came across in town that rented equipment.  Big mistake.  Don’t ever rent equipment in the first place you go.  The woman brought out the tent from the back and when I saw it, I couldn’t believe how big it was.

“But we’re backpacking”  I reminded her

She told me she knows and that this was a backpacking tent.  I remained skeptical.  It was huge!  And heavy!  Only a crazy backpacker would take that thing with them and carry it on their backs.

But we took it anyway thinking that any other tent we tried to rent would be the same.  I guess this makes us crazy backpackers.  This was our first big mistake.

Day 1:   From El Chalten to camp De Agostini (near Laguna Torre)  ( 8.5 km)  The day started off with blue skies but quickly turned grey and then it began to rain. We had no nice views of anything because of the thick cloud cover (so no photos either, sorry).  Luckily the terrain is mostly flat and very easy so it didn´t take us long to hike the 8.5 km.    When we arrived, we realized our second mistake.  We didn’t bother setting up the tent first before we set out.  So now it was raining pretty heavily and we were already pretty wet and we had no clue how to set up this ginormous tent.   We took the tent out of its huge bag (like the kind that you have for car camping) and the poles were the old-school kind.  Big, bulky & heavy.  Ugh.  The tent was much bigger than what we are used to for just the 2 of us and it was a royal pain trying to figure out how to set it up. To top it off, a zipper was broke.  Great.   After many curses and getting really wet, we had our home:

Day 2:  Camp De Agostini to Poincenot ( 7  km) we awoke to grey skies and we attempted a morning hike around Laguna Torre where you can see the glacier.  It was very windy and very cloudy so we didn´t take any photos but if it´s nice weather, you should go.  After we packed up, the sun sort of came out.  We headed out in better spirits.  We started out uphill for the first 2 or 3 km but flattens out when the trail winds past Laguna Madre y Hija.  This makes a perfect spot to stop and have some lunch:

The trail remains flat after you pass the lakes and the remainder of the hike offers fantastic views of Fitz Roy as you head to the camp:

We set up the tent in the freezing campsite Poincenot, which is a nice spot to stay if you plan on hiking up to Lago los Tres but be prepared for the cold (it´s pretty chilly at night here).  From the campground, it is only 2.9 km (one way) to the top at Lago los Tres and you can do it without any backpack because you set up your tent at Poincenot. We decided to do a sunset hike up there because the sky looked so nice.

First, you zig zag your way up this trail (look closely at the photo and the zig zag becomes visible):

It climbs steeply for the entire time.  It only takes a little over an hour to do though.

So you climb up the zig zag in this green, rocky landscape.  When you arrive to the top, you have this view behind you:

And this is the view in front of you (look closely and you can see the people in the lower left corner to give you an idea of the enormity of the place):

Even though I had climbed it three years ago, I still couldn´t get over the different landscape that lies on the other side.  We were really happy to see it all frozen this time.  The benefit of visiting in December.

And if you climb up to the top of the hill on the left side, you can see this emerald looking lake: 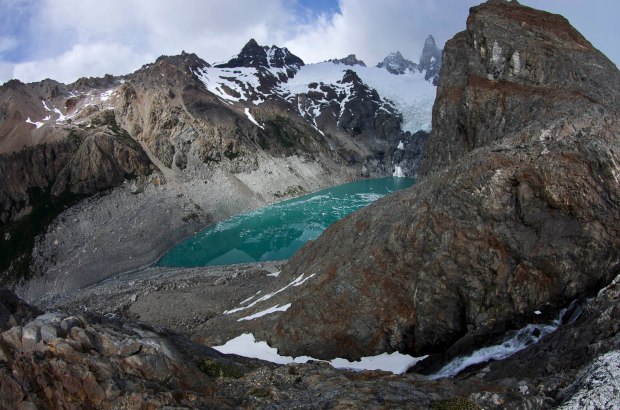 Day 3:  Lago los Tres back to El Chalten (12.4  km).  We started out the day with a coffee followed by a hike up to Lago los Tres (again).  From there we went back to camp Poincenot, packed up the tent and all our stuff and headed back to El Chalten having survived our crappy tent and vowed to be more careful next time.  The trail is long but coming from this direction, it´s mostly downhill.  As you come closer to El Chalten, you have beautiful views of the Rio de las Vueltas: 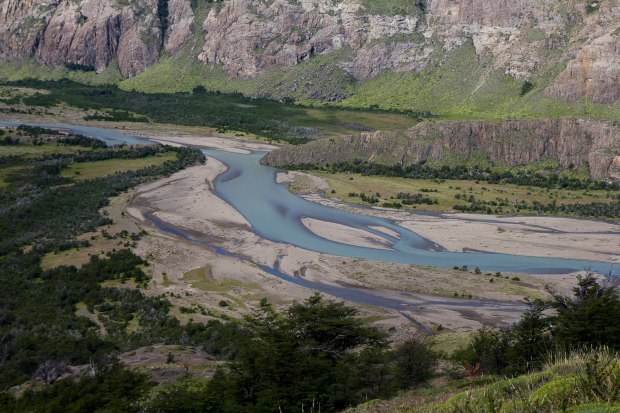 Overall, we found the 3 day trek to be fairly easy so it proved a good warm-up for our big trek around the circuit in Torres del Paine.

1.  Try to bring Argentinian pesos with you if possible.  There is only one ATM in town (located in the bus station) and often times, it’s out of money.  They usually refill it after a few days but it’s better to have some with you.

3.  For those on a budget, you will not have to pay an entrance fee to the national park and camping is free within the national park boundries.  Campgrounds are very rustic basic affairs with a portable toilet and a place to put your tent.  There is also camping available in town; the one we stayed at (El Refugio) was $8 (US) per night with hot showers and use of a basic kitchen.

4.  Splurge for the ice cream at Domo Blanco, it’s expensive and delicious!

5.  If you can avoid visiting in January & February then do so, it really is THAT crowded during that time.  And if you can’t help it and you have to visit at that time, book your accommodation in advance, things book up quickly.  We did the trekking here in Decemeber and it was already starting to get crowded.

6.  If you are renting any equipment, shop around because there are many different places renting and the quality in some is not very good (see above).  Our tent cost us 35 AR pesos per day (US $7).  To cut down cost, try to bring your own sleeping bag from home.  They literally rent everything from mess kits, to stoves to backpacks and even shoes!

7.  The lemon pie at Leona´s estancia is 25 Argentinian pesos well spent.  Don´t miss it if coming in by bus.

8.  I think it goes without saying but the weather in Patagonia is very unpredictable.  The morning we climbed up Lago los Tres, we had snow, wind, sun, rain and clouds.  All in the span of about 2 hours.  So dress in layers and waterproof gear is a MUST.  It´s also important to have some cold weather clothes such as fleece, merino wool thermals and a hat.

After visiting El Chalten for a few days, we didn’t know it then but we ended up returning (I am writing this 1.5 months later).   Upon our return, I learned of many other treks that are possible in this area, ones without the hordes of people that frequently embark on the trek that I documented here.  So stay tuned for an upcoming post where I will detail these other alternative routes.