Our adventures surviving the circuit in TDP part 2

Finally we were going to get our big chance to do the circuit at TDP!  The prospect had me nervously excited as I hoped we could carry as much stuff as we had packed.  Three years ago we failed.  I hoped for the best this time around.  Early in the morning, with our backpacks all packed up and ready to go, we boarded the bus that leaves the town of Puerto Natales and shuttles us over to the park.  For practical information, (like how to get to and from the park and how much everything costs) I will make a separate post to be included under the ‘Tips’ section of the blog.  Soon to come!

We arrived to the park on Sunday morning somewhat refreshed (I mean it was early o’clock since we awoke at 6:30 am to catch our bus at 7:30) and ready to join the other throngs of backpackers.  We gave ourselves up to 7 days to complete the circuit.  This was more than enough time, since we didn’t plan on going up into the Valle del Frances (even though it is one of the most beautiful parts of the park). The extra day proved to come in handy.  We had the most perfect day in the Valle 3 years ago, and due to our time constraints, we decided to nix it.

Time it took us: 4 hours

Terrain:  Mostly uphill the for the first 2 hours; downhill to Refugio Chileno; up and down after

Cost: $8 (US) each (no showers but a bathroom.  Camp spots are wooded (good protection for rain); some are nicer than others); water available from river

The weather was pretty good when we arrived to the park.  By pretty good I mean it wasn’t torrential downpours, hurricane-force gusts of wind and you could actually see the namesake towers (I know people who visited the park for over a week and never even saw the towers once due to bad weather!)  Patagonian weather is known for its high wind gusts, every which way rain and unpredictability.  You ask someone what the weather is going to be like and you inevitably get the same answer: This is Patagonia, you can have all 4 seasons in one day.  And it’s totally true.  We did.

We were lucky, we could SEE the towers as we rode the bus into the park.  If you can see the towers when you arrive, you should hike straight to them.  So we schlepped on our very heavy backpacks (the first day is always the worst because you are carrying all of your food and your pack is at its absolute heaviest) and we took the obligatory ‘starting out’ photos: 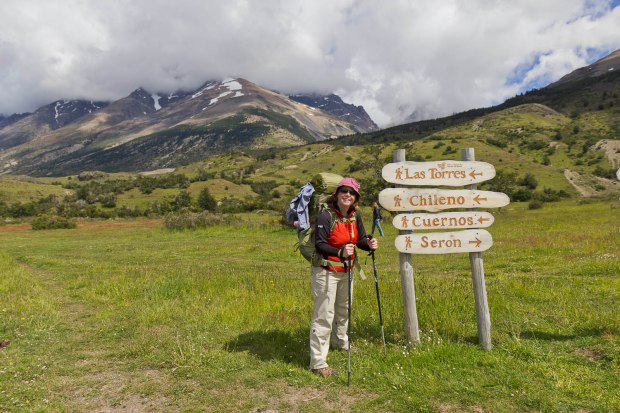 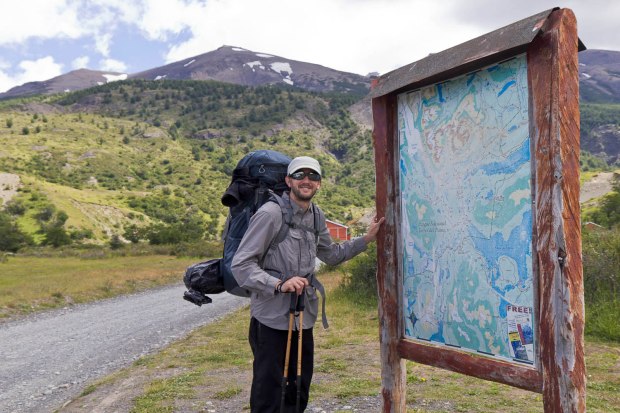 We look so fresh! 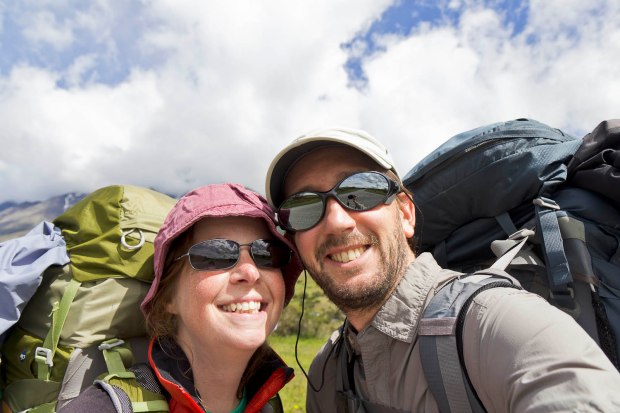 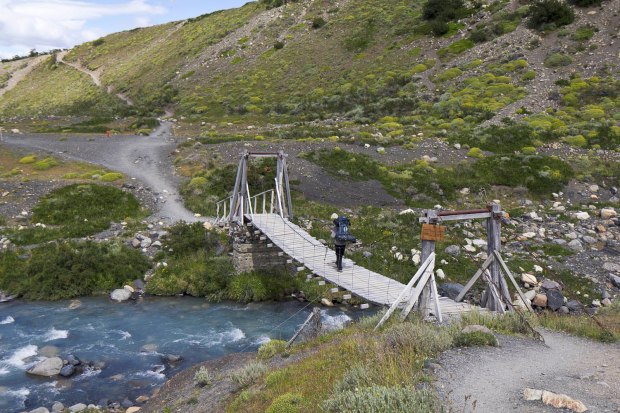 It takes about 4 hours from the Hosteria Torres (where the bus drops you off) and it’s mostly uphill but even with our bags at their heaviest (mine was about 16 kg (35 lbs) and Laurent had about 19 kg (40 lbs) we surprised ourselves by doing okay.  No sore shoulders or achy muscles.  In fact, we almost found it easy!  Almost.  The views going up are spectacular and make up for any fatigue: 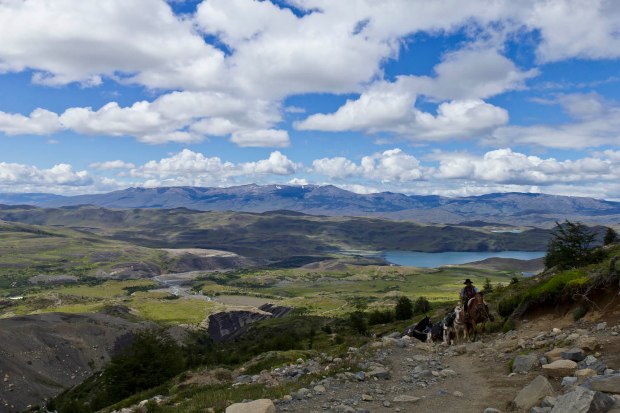 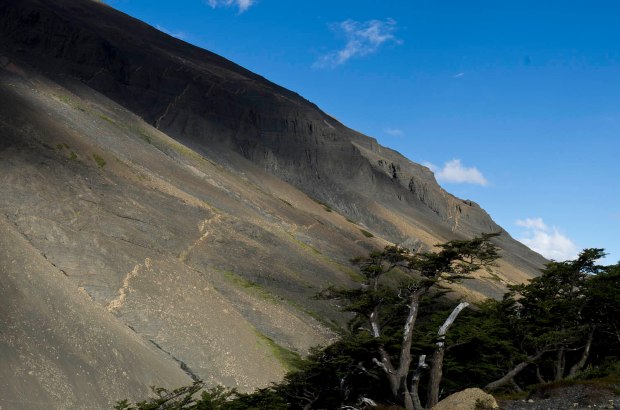 We set up the tent at Campamento Torres, which is only 0.8 km from the mirador (lookout point) for the Torres.  Since we woke up so early and walked uphill all day and it was all uphill to the mirador, we decided to just cook our measly pasta with soup sauce and call it a day.  The winter solstice was only days away which meant a very early sunrise (around 5:30 am-ugh). We wanted to be as fresh as we could for the sunrise.  So we went to bed and set our alarm for the next morning at 4:30 am.

Total time it took us: 2 hours round-trip to and fro the mirador; 3.5 hours from Camp Torres back to Hosteria Torres; 5 hours to Seron

Cost: $7  (hot showers & bathrooms available, just some grass to pitch your tent (no protection from rain) tents very close together-not a lot of space, no cooking shelter, sink to wash dishes, fill up water at sink

The alarm went off at 4:30 and I was so tired that I half hoped it was raining so that I could keep sleeping.  Three years ago we woke up for the sunrise at the Torres and it was absolutely magical.  I thought nothing could compete with that.  I was wrong.  I peeked my head out of the tent to the sight of other campers milling about, headlamps all shining in the dark.   I took a sleepy look up at the sky.  Crystal clear with stars!  That was all I needed to get me going.  We started scurrying around the camp getting our things together.  We brought our breakfast and the stove to make some coffee too.  To get to the mirador, you have to climb pretty much straight up for about 45 minutes.  The big advantage is you get to leave your tent and your backpack behind so you are carrying practically nothing.  Even though we were tired, we huffed our way to the top where other early risers were already waiting for the moment: 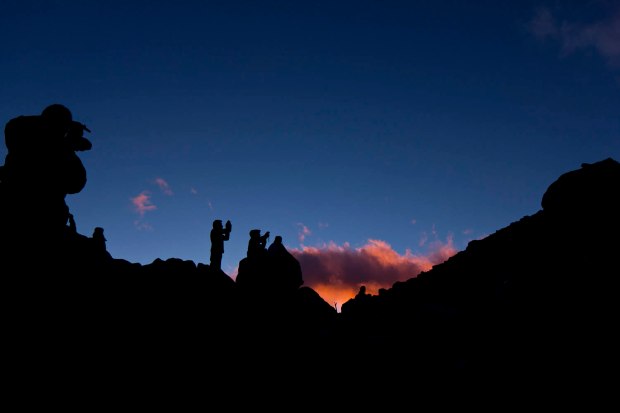 And then the moment arrived.  Seeing the sun hit the towers and turn those grey granite stones into tones of red, yellow and orange is a phenomenal experience. It’s worth everything you had to do to get to be a witness to this natural spectacle: 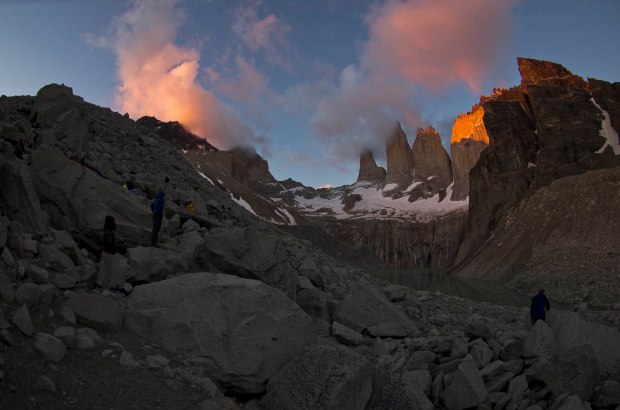 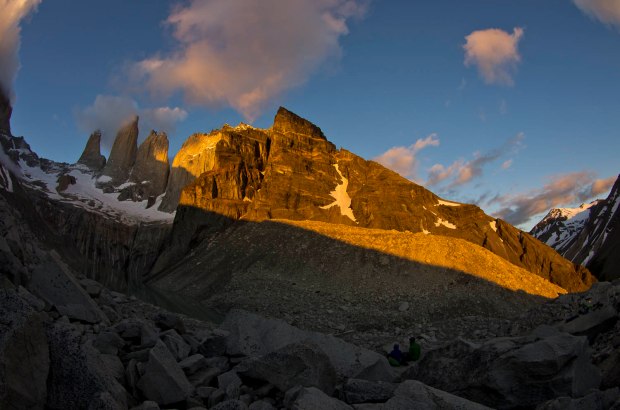 The sun lights up the towers just for a brief few moments and you almost want to applaud nature for this magical moment: 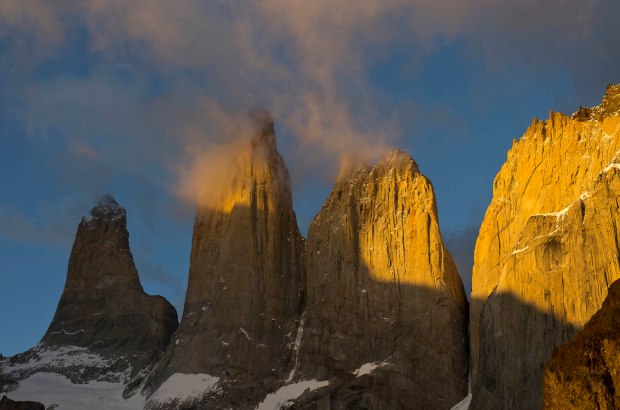 And as the sun ascends, the granite towers turn back to grey: 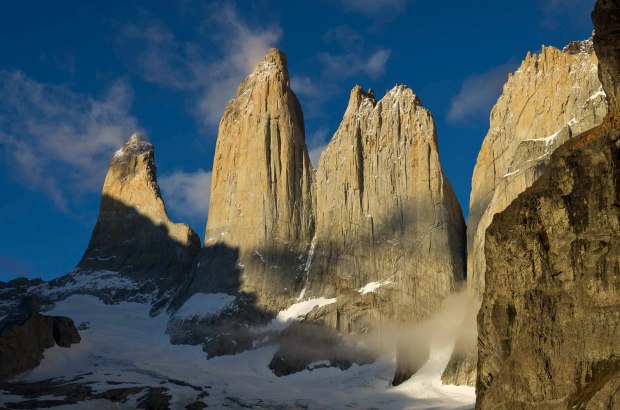 We were so lucky to hang around making our breakfast and enjoying the windless, clear skies.  Due to the lack of wind, we even had a perfect reflection of the towers in the lake that lies below them: 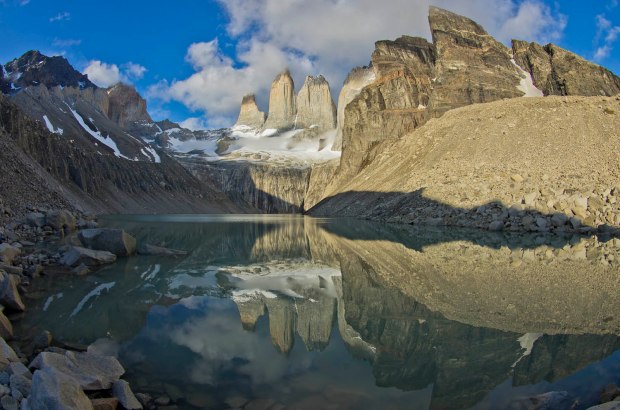 We couldn’t believe how lucky we were!  We stayed there for about 2 hours just enjoying the views & taking photos.  Here we are day 2: 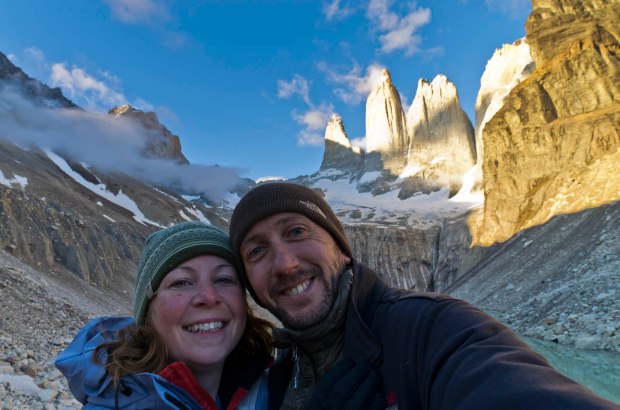 And as clear as it was, in about 5 minutes, clouds began to surround the towers cloaking it for the day hikers already making their way: 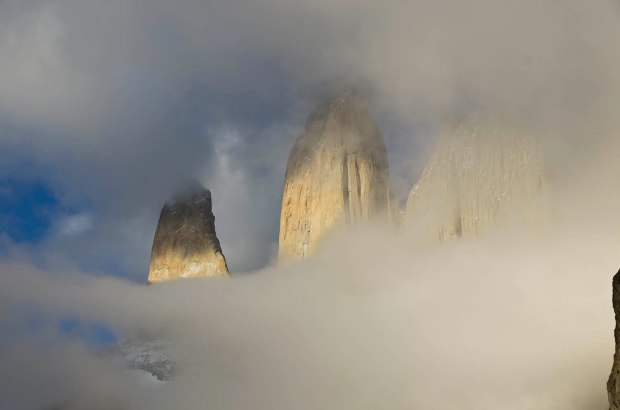 That’s Patagonian weather for you.

After our celebrated start to the day, we returned to camp, packed up our tent and headed back to the Hosteria Torres from which we came the day before: 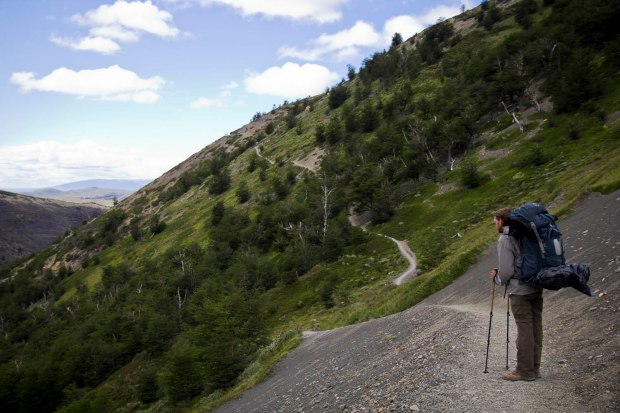 Going back to the Hosteria wasn’t so bad.  It was mostly downhill.  We arrived back around 1 pm and decided to have a nice big lunch to celebrate our beautiful morning.  Big mistake.  After lunch, I felt like taking a nap.  The last thing I felt like doing was strapping my backpack on again and walking for another 5 hours.  But we wanted to get to Camp Seron by night.  I didn’t think it would take so long.  It looked a lot closer on the map.  I was wrong.  It felt like it took forever.  My feet started to ache.  We were taking a lot of breaks to ‘rest’.  My shoulders were a bit sore and my stomach growled furiously.  There were daisies everywhere you looked.  It was beautiful but when I tried smiling but I was too tired for that.  We trudged on: 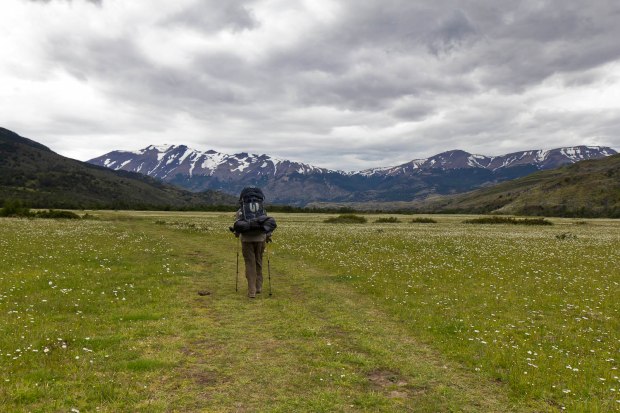 We finally reached the crappy campground Seron.  We took no photos because it started raining.  Fortunately, we were able to cook our kinda crappy pasta with another cream soup for sauce.  Thank god for parmesean cheese and butter! We set up the tent and listened to the rain beat down as we quickly drifted off to sleep.  Our spirits were about as damp as the ground.

Terrain:  Up & down for 4 hours; some mud to get through (if raining I’m sure it is much worse), the last 2 hours are pretty flat.  Sharp descent down to Dickson

Cost:  $30 each (we caved and stayed in the refugio); camping is about $8, there are bathrooms, normally hot showers but only cold when we were there; no cooking shelter but picnic tables, sink for dishes.  Campground is big, views are extraordinary and so are the mosquitos!  Bring repellent; small “store” selling coca cola, wine & chips.

We woke up to the rain again.  And a weird Brazilian guy whistling.  Seron is the first place you will see your other ‘trekkers of the circuit’. At the next campgrounds, you will probably be seeing the same familiar faces again and again. Unlike the ‘W”, where people come and go in every direction, when you hike the circuit, you normally go counterclockwise. You don’t see many people because almost everyone (except the crazies) are hiking in the same direction as you are. You get rewarded with the amazing view of Glacier Grey from Paso Gardner if you do it counter-clockwise.  Also if you hike it clockwise, you have to climb ridiculously steeply to come over the pass.  Only crazy people go that way.  We met a few and they were all crazy.  No, really.

So our tent was soaked and when it’s raining and you’re tired and you know you have to hike 11 miles that day, you try to stay as long as possible in your warm sleeping bag.  Because the thought of going outside in the rain to pee, make coffee, breakfast and pack up everything all soggy is a very unappetizing prospect, to say the very least.  But eventually you have to force yourself out.  So we did.  We packed up and it stopped raining.  That cheered us up.  Here we are on day 3: 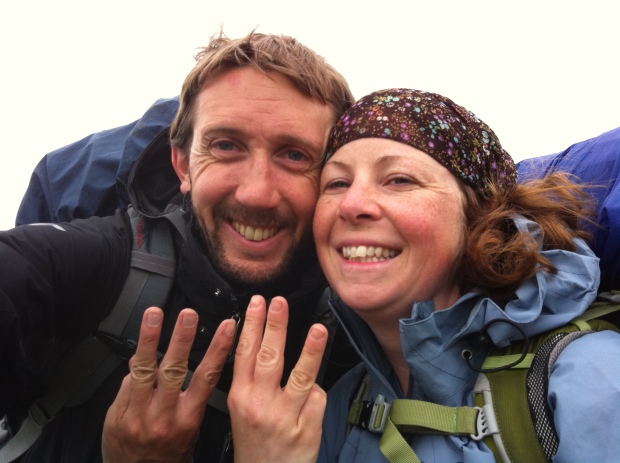 We were one of the last people to leave camp and start the long  journey to Lago Dickson.  People that I met told me that this day the terrain would be totally flat.  To any of you who plan to trek this, it’s bullshit.  It’s not flat until the last 2 hours.  It’s up and down the whole way.  And it’s long. And the up is really up.  It feels like forever.  When you are in your 5th hour of trekking, Dickson feels like some make-believe place that doesn’t actually exist.

The rain held off all day but the clouds clung to everything.  We trudged on.  We saw no one all day. 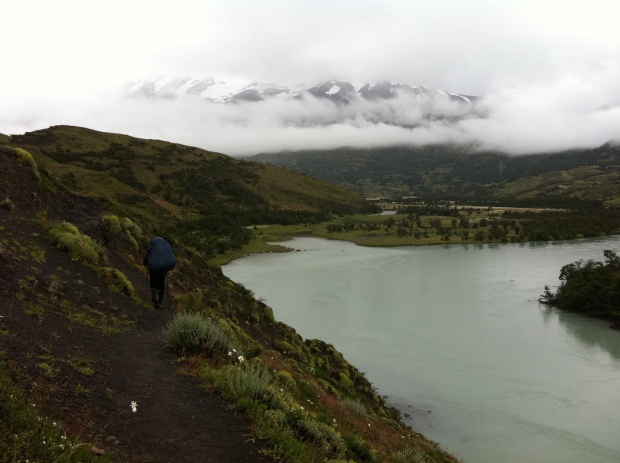 When we were about an hour away from Dickson, we took a much needed break.  Laurent asked me ‘Do you want to spend the night at the refugio, if they have the room?’  Normally Laurent comes up with crazy ideas that I hesitantly go along with but this idea was just brilliant!  It came right at the peak of my exhaustion, when my feet ached so bad and even the muscles in my legs started to burn.  The thought of setting up a wet tent in a cloudy, damp place was not appealing whatsoever.  I happily agreed and it gave me enough energy to get to our destination. Finally, at long last, Dickson!  It’s the name of the both the glacier and the lake.  It might as well have been called paradise.  A place where the glacier overtakes the massive mountain and spills out into the lake.  Arriving here felt surreal and spectacular because of the placid beauty and because we had actually arrived! 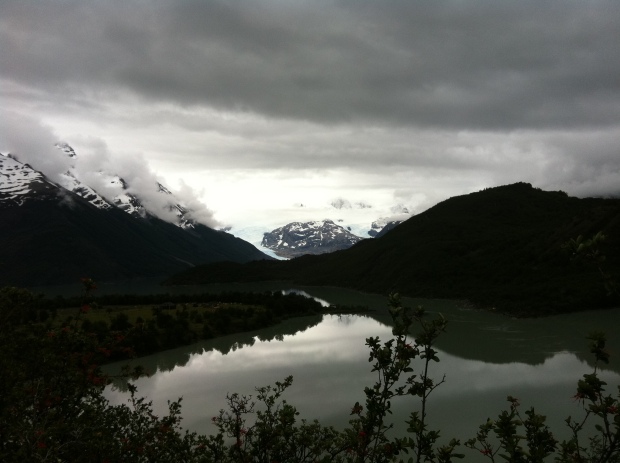 We eagerly climbed down to the refugio and were elated to discover no one was sleeping there.  We had the place to ourselves.  We hung everything out to dry and slept in beds.  No shower was had but sleeping in a bed, even a bunkbed, felt like pure luxury.