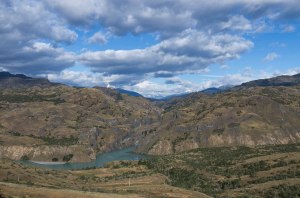 After waiting in Villa O Higgins until Friday we took the “bus”.  The bus was actually more like a minivan and the ride that followed was just the beginning of our dusty, bumpy journey.  Now, when I say dusty…I REALLY mean dusty!! Like at the end of the day, you are covered with a fine dust that you can actually wipe off (including dust UNDER your pants!).  Dusty like you could see the cloud of dust inside the “bus” as we rode.  Dusty like your backpack and all your stuff was covered with dust (despite having a cover over it).  Unimaginable (until this point in time) dust! 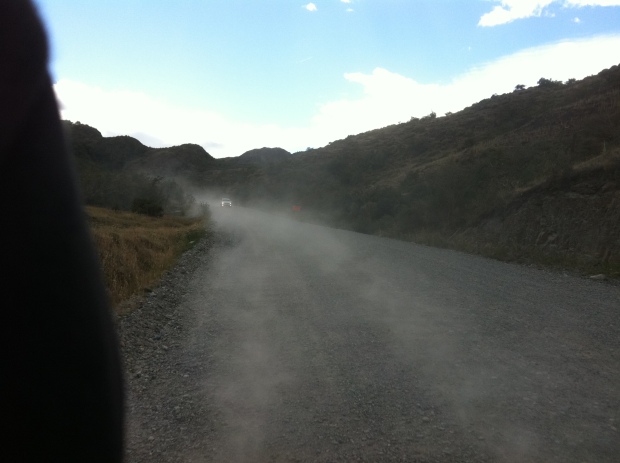 Did I mention bumpy too?  There were mammoth sized potholes, covering the entire Carretera Austral!  For the cyclists, it turned into an obstacle course. At least they had the option to go around.  The buses and cars just had to ride with it.  It made the BQE look like a smooth sail!  But as bumpy & dusty as it was, the views were amazing:

We tried to go to a small (and I mean small!) village called Caleta Tortel: 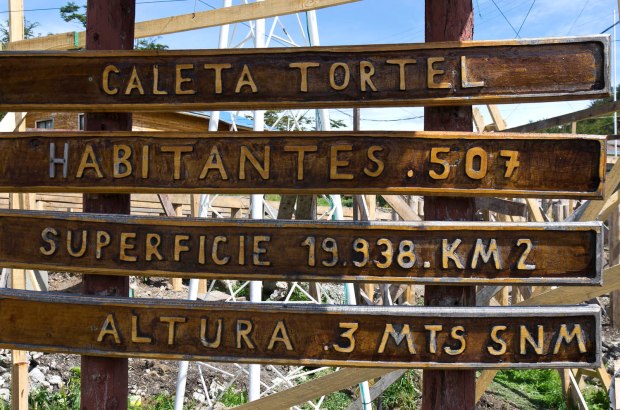 which is not very far from Villa O Higgins (and hey! what’s with that name, O Higgins!  How did an Irish name like that end up in Chilean Patagonia?!  Well, I wondered the same thing so I googled the famous Bernardo O Higgins).

The bus that we had waited almost a week for from Villa O Higgins, didn’t actually go to Caleta Tortel.  It conveniently dropped you off at the crossroads where you could either hike the 20 kilometers or hitchhike.  This time, hitchhiking won out.  We couldn’t even think of another walk that long with all of our crap.

I tried hitchhiking once in Iceland.  It didn’t go very well.  Other than that experience, I had none.  And Laurent had never even tried.  So we were pretty much clueless as to how to go about this. It seemed simple enough, just put your thumb out!  I had seen it in the movies.  Like most things though, it’s easier said than done.

But we felt awkward.  We are almost 40!  I thought this would be easier if I was 18 or even 28!  It seemed like such a beggarly thing to do!  Bumming rides off the kindness of strangers. But we didn’t really have much choice.  We were NOT walking!

So it went something like this:  Laurent insisted that I should put out my thumb because I’m the girl and that’s a girls job.  I thought this was slightly sexist, so I protested and insist he join me.  After all, we were BOTH trying to get a ride!  A car sounded in the distance.  “You put the thumb out!”, “No, YOU!”  This went back & forth as the car passed us by.  No thumbs were put out.  No ride.  Not a promising start.

There is not much traffic in these parts.  Not a whole lot of cars even travel on the Carretera Austral due to its giant potholes & lack of gas available. Rides are few and far between. This was no time for arguing.  Finally another car came.  We both timidly put our thumbs out.  Were you supposed to shake it?  Hold it perfectly still? Show some leg?  Stand still?  I smiled because I figured that would help.  The car slowed down!  It was working!!  We ran up to the car and they asked us where we were from.  Thank god our Spanish is somewhat functional at this point.  They were going our way and literally re-arranged their whole car to fit us in.  They were an incredibly kind couple from Santiago on holiday in this most beautiful part of their country.  We ended up having a beer with them, taking a boat trip the next day together and made plans to meet up when we visit Santiago.

beautiful Caleta Tortel as seen from above. No roads just walkways 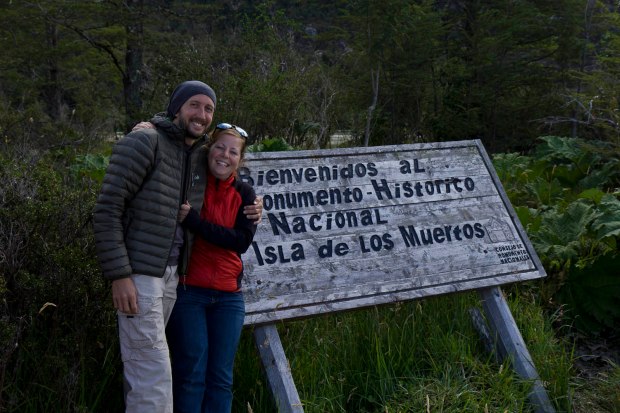 us at the isla de los muertos which is shrouded in mystery as to why the people who were lured there on the promise of work, suddenly died

This is when I realized hitchhikings magic benefits.  Meeting kindhearted people!  I could get used to this.  Suddenly, we had a whole new way to travel.  And we really did.  Seeing as the buses (and by bus I mean minivan!) usually ran once a day, three times a week (if you were lucky), with no advance tickets able to be bought (and locals having priority when boarding buses), hitchhiking seemed like our magic ticket to transport.

Caleta Tortel was worth the work to get there.  The entire small village is made up of fragrant smelling, cypress boardwalks.  That means no cars.  Just the sound of footsteps.  The boardwalks are contrasted by the turquoise waters of the Rio Baker.

The rest of the month followed similar suit.  We hitchhiked our way in and out of these tiny towns.  Towns so small that the ‘supermarcado’ was just a room in someones house.  If it was a really big store, it was 2 or 3 rooms in their house.  You were lucky to find pasta, rice, canned tuna & tomatoes.  But when you thought about where you were, in the middle of Patagonia, you kind of marveled that there were any markets at all!  Most of the towns had dusty roads and chickens running loose everywhere (true free range) and this naturally made for eggs with lovely orange yolks.  Yum.

Most of the time we camped.  Sometimes we treated ourselves to staying in someones house in a hospedaje:

Hospedaje’s are literally a room in someones house. The walls are paper thin, the beds are usually comfy & the shower could be burning hot or ice cold or both!

Campgrounds consisted of staying in someones backyard and waking up to the chickens running alongside your tent.  Roosters started crowing every morning at around 6 am, becoming our new alarm clock:

the most handsome alarm c(l)ock

We  ate a lot of pasta and drank wine out of boxes (I know! but surprisingly good in Chile), barely had showers (the water in the hospedajes fluctuated from either burning hot to icicle cold all in one shower!) and tried to practice our Spanish.  Most towns had about a thousand people.  One place had 30!  We had the opportunity to stay on an organic farm and hang out with one of its famous local residents:

The people were some of the friendliest I have met anywhere in the world.  Señoras doting on you like a long-lost abuela:

one of my favorite señoras

In Caleta Tortel, every single person that walks past you greets you with a “Buenos Tardes” or an “Hola”.  People were just always willing to chat and I found the Chileans in the south to be very curious and genuinely interested.  We met a few Huasos (Chilean cowboys).  We even went to a rodeo complete with traditional Patagonian lamb asado:

We got really good at hitchhiking.  We made signs:

We observed other hitchers styles.  The lazy ones lie on the grass, barely making a move when a car approaches.  I didn’t like that style.  Come on, you gotta work a little bit for it!  The crazy ones stay practically in the middle of the road waving their thumb violently.  The desperate ones clench their hands in prayer demanding the cars attention.  Our tactic was a sign, usually saying where we were going, where we were from (the first question everyone asked us) and that we were nice people.  If we could fit it in, we wrote ‘por favor’.  After all, we had to be polite!  We bought a magic marker and we scoured supermarkets for old cardboard.  We were pros!  One day we received 5 rides in one day!

We met such an amazing assortment of people.  Everyone from a dad taking his 5 year old son on a fishing trip (where we all happily munched cookies together) to other nice couples to old gaucho type men to farm workers to construction workers.  Often times, we rode in the back of pick-up trucks.  Mostly when the cab was crowded with families.  Riding in the back was so fun!  But dusty!  But the views! 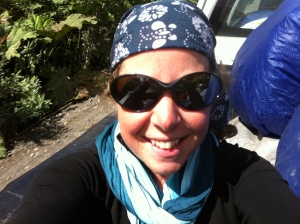 We even met a traveling salesmen type of guy, who stopped in all the tiny supermarkets in the tiny towns peddling his shampoo.  This turned the already long ride of 5 hours into 8 hours.  But we were so desperate to leave this town, we made a sign offering money!

offering money is the quickest way to get a ride

The traveling salesman guy accepted our offer.  The only caveat (which turned into a pleasure) was having to go and stop at all the markets and wait for the guy.  He blasted Elton John on continuous loop and because we paid him or because he was just really nice, he played tour guide for us.  He stopped at every vista, explained to us about each place and even took us up to a viewpoint after we reached our destination.  All this while listening to ‘Rocket Man’ on full blast.  Good times. 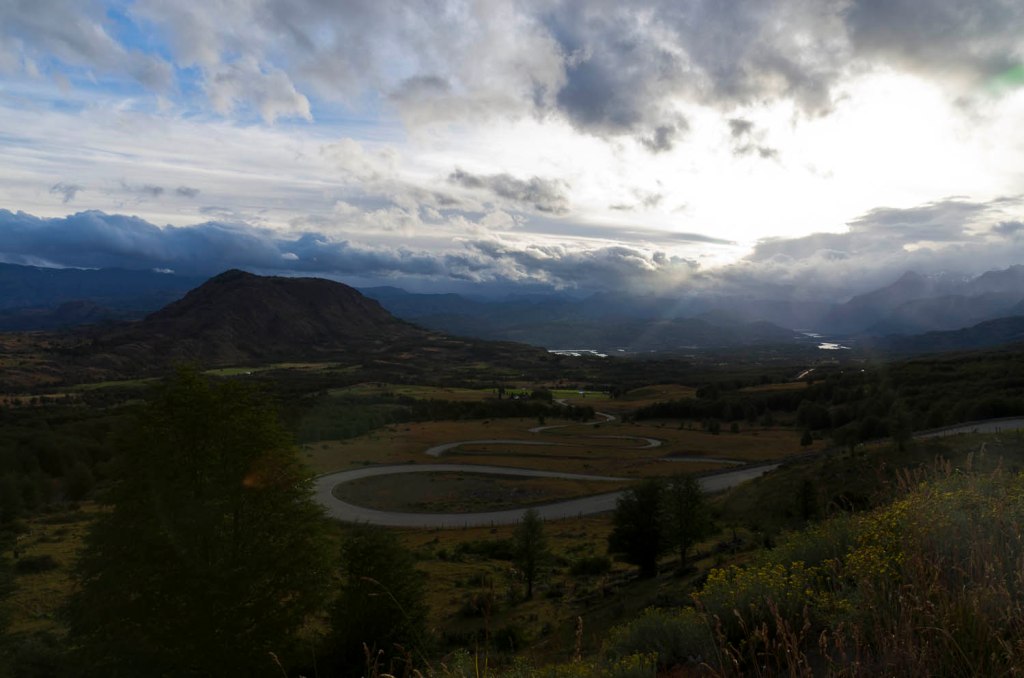 small section of the Carretera that is actually paved 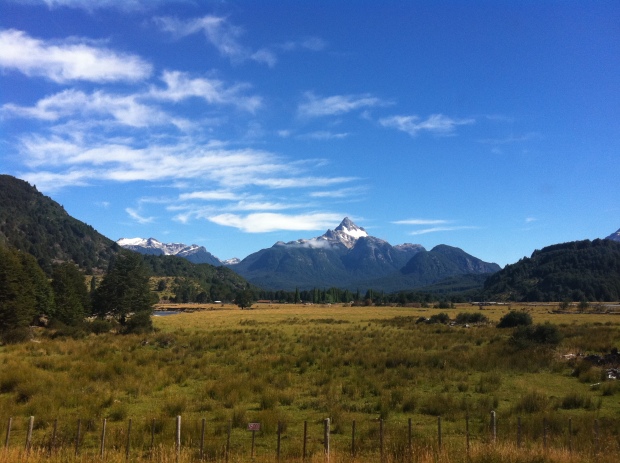 even in the rain, it was still beautiful

We celebrated Valentines Day by trying to go fishing for trout with a guy who taught everyone in the town how to navigate the notorious, Rio Baker.  He would even take his tiny wooden fishing boat over the Class III & IV rapids!  Because it was so windy, we couldn’t go and so we instead drank maté with him and tried our best to converse in our bad Spanish.  I made guacamole in the shape of a heart (they actually had a decent avocado in one of the ‘supermarkets’!)

kinda gross looking but the intention was there

and we spent 6 hours in the rain trying to hitch a ride.  Despite all this, it was one of the most romantic Valentines days yet. 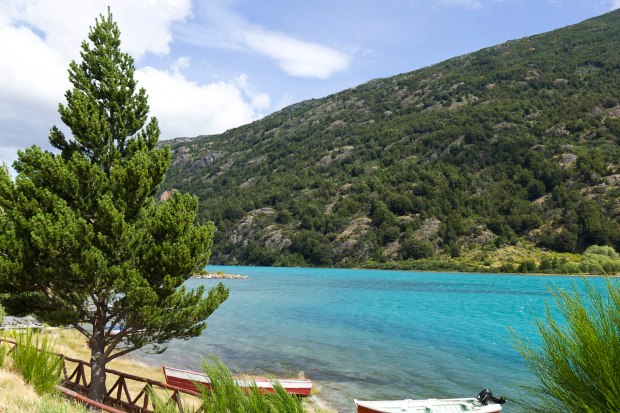 the Rio Baker which is famous for its fly fishing & trout

We saved a lot of money by camping and eating meagerly.  Plus we had the added benefit of seeing this practically every night:

you can just make out the southern cross in the sky!

It was the little things like this that made the journey truly spectacular.

Stay tuned for the last and final installment!!