Discovering crudo in Valdivia & realizing the f-ing Germans are everywhere! 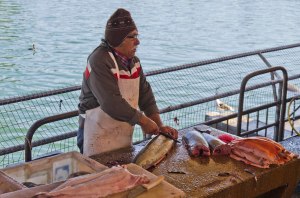 After Cochamo, we ventured out to Valdivia.  I was told that I shouldn’t  miss the market there because it’s full of fresh seafood and it’s true.  Although small in size, it’s a market lovers paradise.  You can purchase different types of fresh fish, get it cut up right on the spot to take home & cook up a feast: 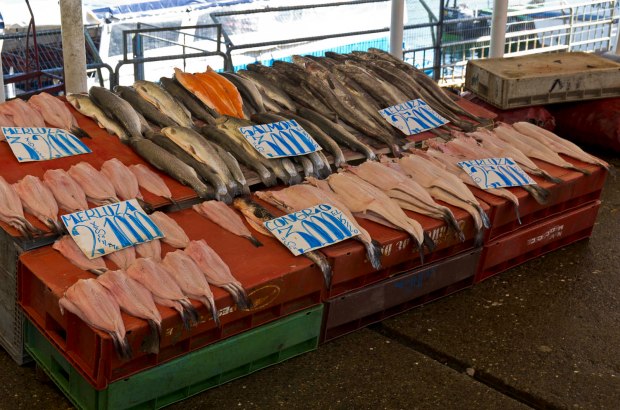 catch of the day 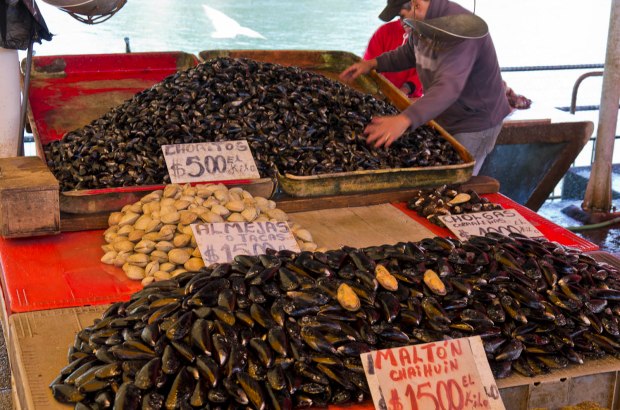 along with fresh fruits and vegetables: 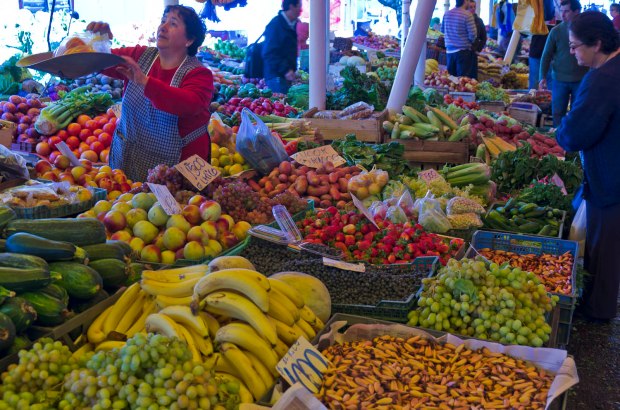 Valdivia is also home to many German immigrants (just like Puerto Varas & Puerto Montt, mentioned here).  Goddam, those Germans are freaking everywhere!  Not only have we met more German travelers in the past 6 months than any other nationality but here they were even in food form everywhere in Chile!  What gives Germans?!  No offense to any of you & I love a lot of you but geez, you guys are all over the freaking world!  Everywhere I have ever traveled has been filled with Germans! 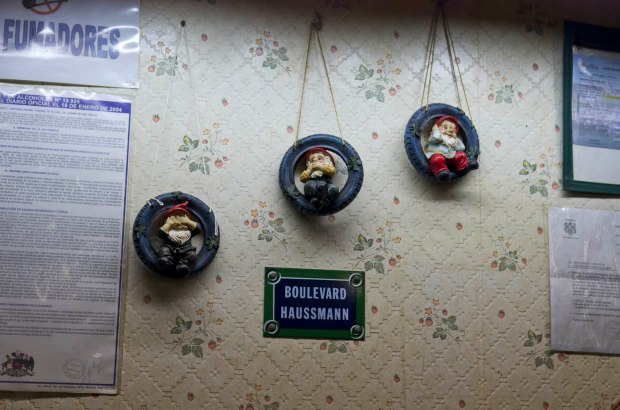 Sorry for the short rant but it’s a real phenomenon!  Valdivia is home to one of the best beers in Chile, which is not saying a lot when you have stuff like Escudo & Cristal to compare it to (think Bud & Coors).   But Kunstmann is a good beer even compared with others in the world & they have their own brewery here in Valdivia which I sadly did not visit (I know…I am embarassed being the beer lover I am but the food was supposed to be awful & it was raining much of the time we were here and ok, I was lazy).  Kuntsmann even has their own version of Oktoberfest called Bierfest!  Cheers for the Germans! 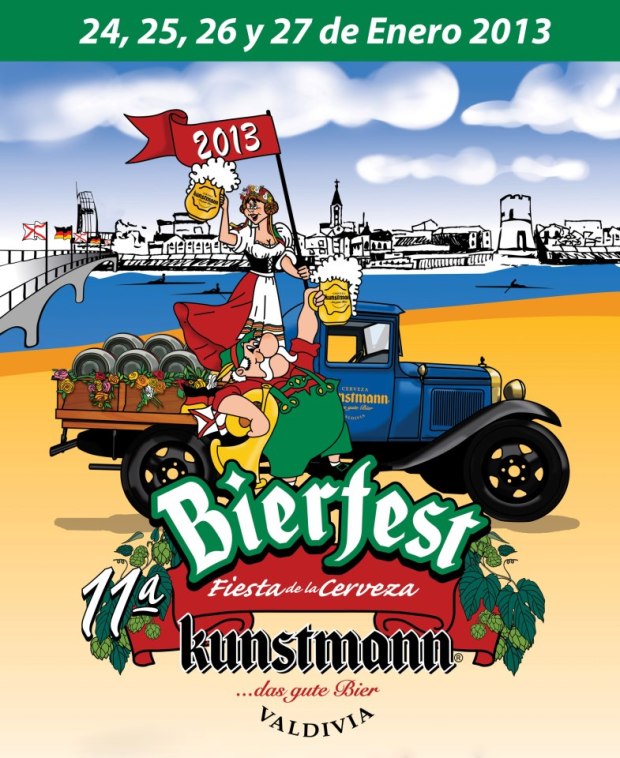 In addition to the beer and the widespread kuchen,  I found a curious “German specialty” only in Valdivia  (which I still remain dubious to its origin) called crudo.  I had never heard of crudo before.  Steak tartar, yes, of course.  But this poor mans version?  Raw meat spread thin on white (practically wonder) bread!  topped with minced onions & your choice of condiments left me perplexed.  And here in Chile of all places?!  I just HAD to try it! 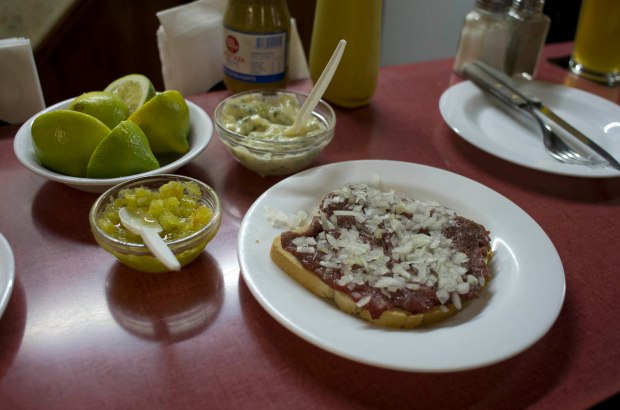 crudo in all its condiment glory

I did some research and found a German dish called ‘Mett’ which was similar but made with pork.  Of all the Germans I have met in my day, I have never seen or heard of any ‘Mett’.  Hey, any of you Germans out there reading can help validate (or not) this?!

But when we passed by the famous Haussmann’s cafe, I couldn’t resist stopping in to have a taste.  I thought I would hate it but when squeezed with lemons (kind of ‘cooking’ the meat-as in ceviche) topped with the onions and some relish, I found it surprisingly tasty!  Maybe it was all those Kuntsmann ales we washed it down with.  In any case, I was  happy to make the discovery of crudo. 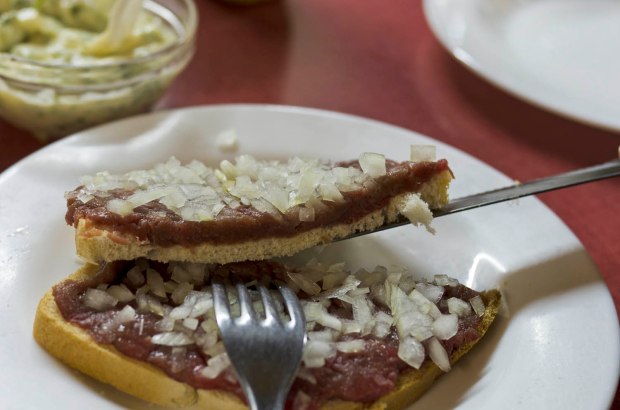 close up and ready to eat

Less impressive were the hot dogs, vile pink things they were.  Packed into an oversized bun served with chopped tomatoes then smeared with mushed avocado and slathered with mayo.  Sounds good, eh?  Yeah, they are about that good!  They go by the name completos and while they might (I really stress the term might) make good drunk food, they are a bit strange to eat while sober. 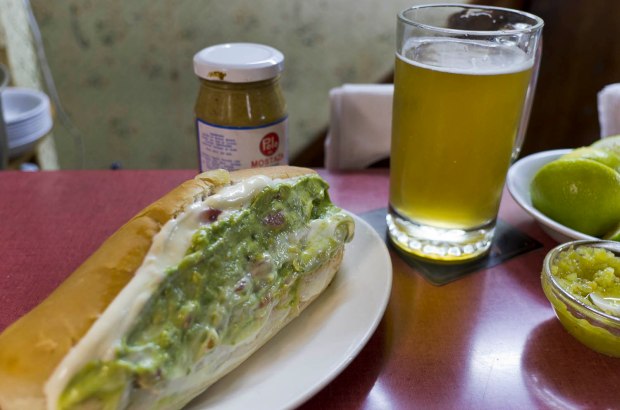 the ubiquitous completo, found all over Chile…looks innocent enough 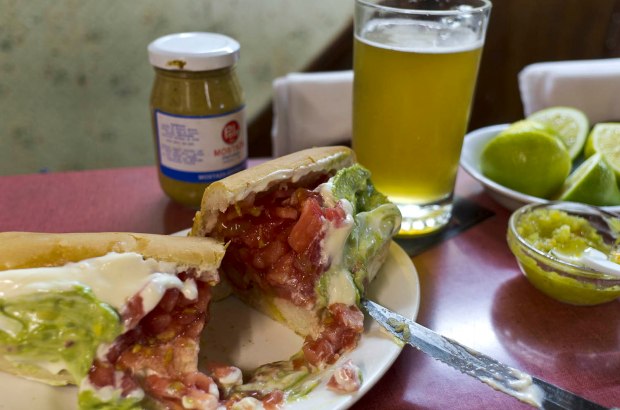 until you split it open & reveal the beast within

After our very short 2 days in Valdivia, we went to Pucon.  Appropriately dubbed the ‘adventure capital of Chile’.  It’s easy to see why when you arrive.  The streets are filled with restaurants catering to tourists; there are tour companies on every street corner beckoning you to take a wide variety of adventure tours including climbing the nearby Villaricca volcano (most popular), hydrospeeding (a new one to me), rafting, ziplining…you get the picture.  Pucon is beautifully situated but the town is dreadful.  No character of its own, just throngs of backpackers looking to get their ‘adventure’ fix namely by climbing that volcano.  No thanks. 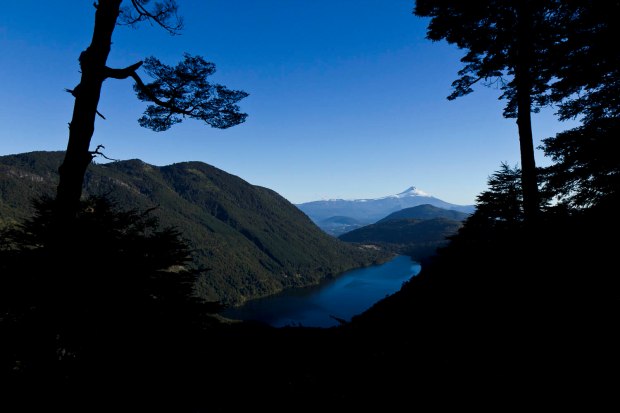 We did not embark on any of these adventures.  We had had enough of that.  Instead we just did some plain old hiking to explore the stunning nature in the area.  The beautiful Cañi preserve boasts views of four volcanoes at its summit in addition to walking around mirror-like lakes. 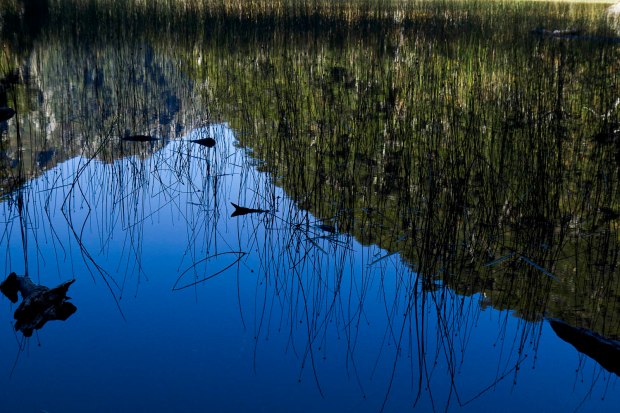 You can spend a night or two at the refugio there. 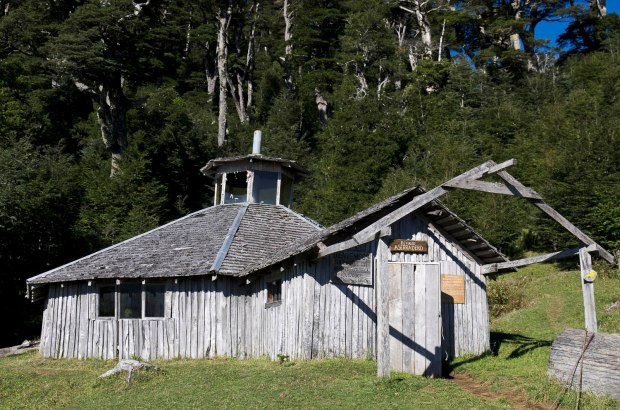 I had my first introduction to aracuana (monkey puzzle) trees here and had an opportunity to forage the piñons (pine nuts) that they produce (more on that later). 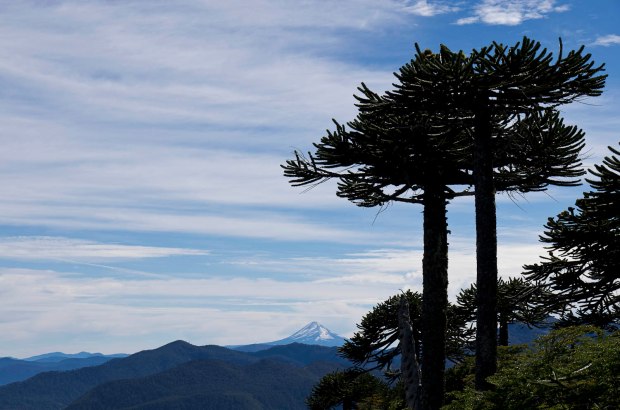 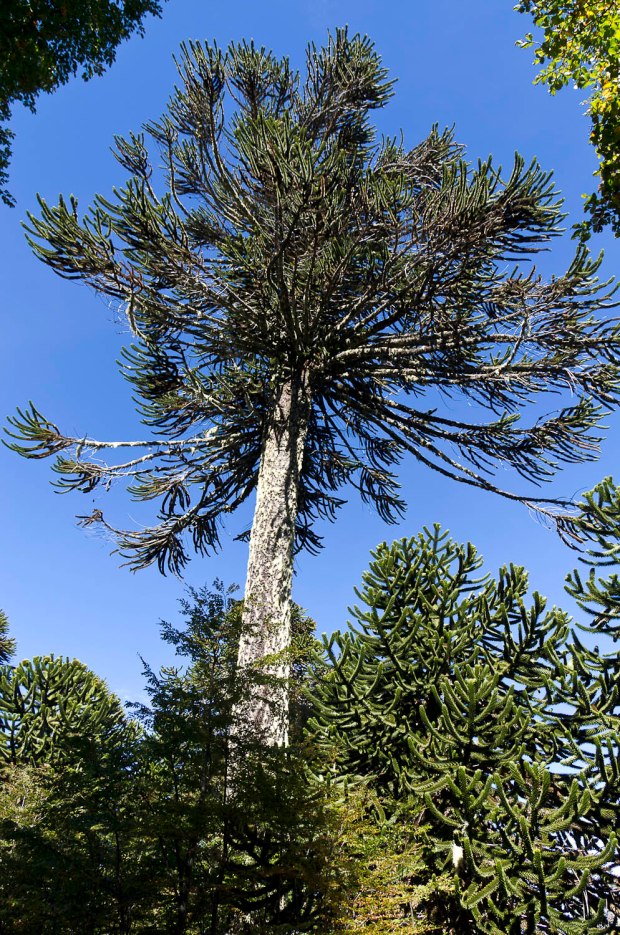 one of the 4 volcanoes you can view from the summit

We also visited the Parque Nacional Huerquehue and I highly recommend two days there with an overnight in this refugio. 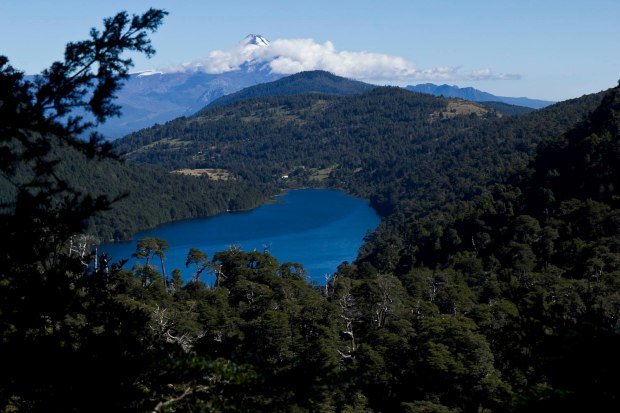 views from the Parque Nacional 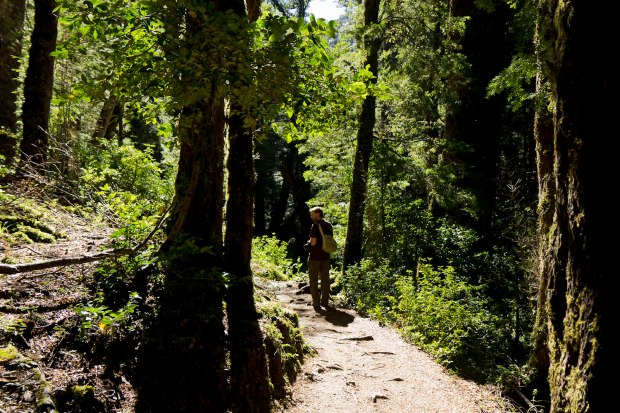 rainforest-like atmosphere on the hiking trails 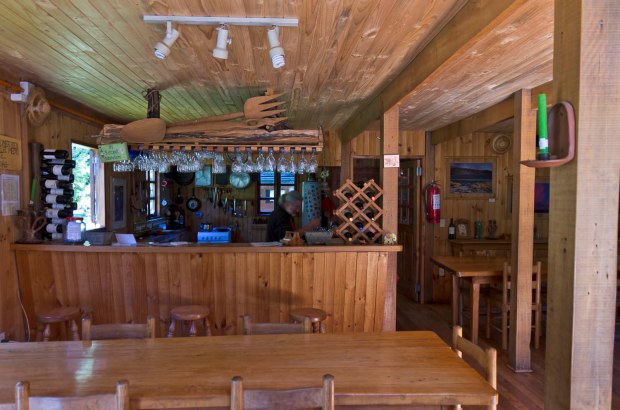 In between our hikes, I headed over to the nearby town of Curarrehue to take a Mapuche cooking class.  More on that in the next post!  Stay tuned!