A fitting farewell to Chile & a crazy hello to Bolivia

If any of you remember, we walked into Chile way back on January 28!

poor Laurent, literally trudging the 23 km over the border with 40 kilos on his back!

Since then, we have had a great love affair with this country.  Chile has some of the friendliest, most interesting people.  People who are innately curious and who offer much in terms of their culture and of course their food! Let’s take a walk down Chilean food memory lane.  Some of my favorite dishes like pastel de choclo (a meat/chicken pie covered with corn):

pastel de choclo, one of Chile’s most famous & delicious dishes

machas are razor clams and these are made with white wine, butter, then baked in the oven with parmesean cheese 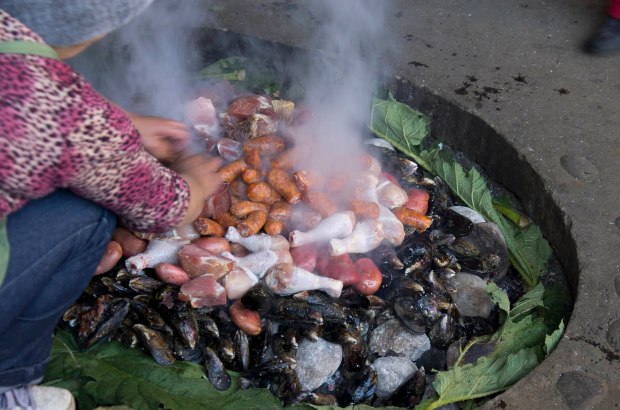 curanto made with shellfish, meat, potatoes, chicken & special breads made form potato is cooked on hot stones in the ground (al hoyo)

Let’s not forget all the various homey cazuelas (soups) and the fresh congrio (eel): 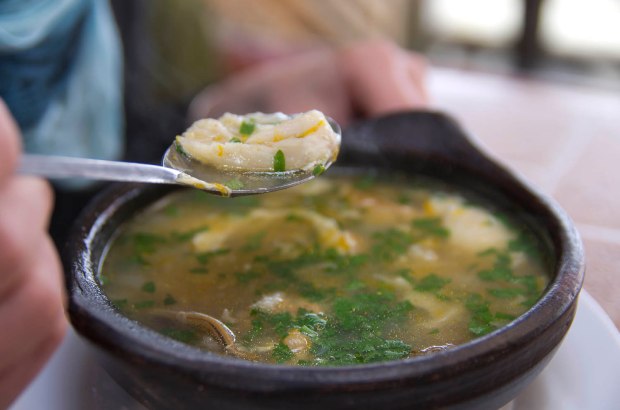 Rich dishes like the chupe.  This one is made with crab and cream: 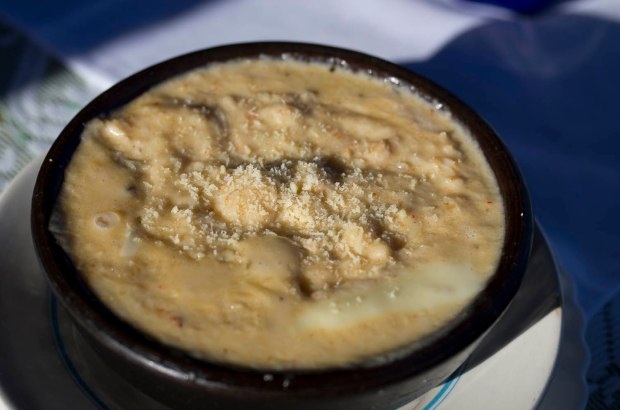 or street food like the ubiquitous empanada & sopapilla (made from fried pumpkin flour):

Don’t forget sweets either, with Chile’s divine kuchens. These are gifts of the modern Chilean cook  from the old German influence: 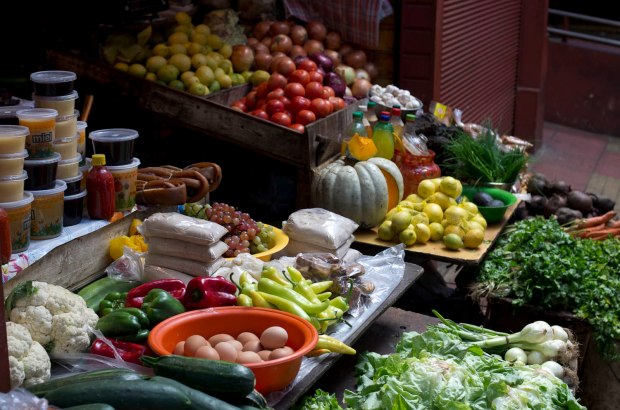 one of the many markets in Chile, this one in Angelmo

These are dishes that define Chilean food for me.  Chilean food is by no means sophisticated but instead is homey,comforting and well prepared.  People have told me that there is no real Chilean food.  I couldn’t disagree more.  Chile’s food  heart is defined by it’s fresh ingredients (fish and produce) and the care put into each dish.  And let’s not forget that pisco sour!

So we had to depart Chile with a bang since we entered with one!  We decided to head to the very north of the country, right on the border with Peru, to Arica.  Arica isn’t anything special and if any of you reading are contemplating if it’s worth a visit, it’s really not.  Sorry Arica!  Instead, head a bit east to the tiny village of Putre.  Putre is a very small but friendly place but the real draw is the nearby Parque Nacional Lauca. 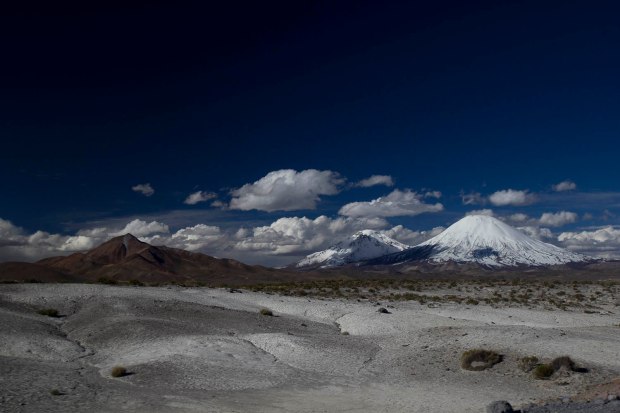 Just a few minutes from Putre puts you in the heart of Lauca.  If you like stunning, altiplano (high-altitude plains) scenery and few people, you will love Parque Nacional Lauca.  You can arranage your trip in Arica but I recommend you just wait til you get to Putre.  We stayed at the wonderful Hostel Pachamama and our host, Juan, helped us arrange a trip into the park.  He even hired a private guide to take our group of 5 for just 15,000 CLP (about $30 US).  If you have a chance to visit this special place-do it! 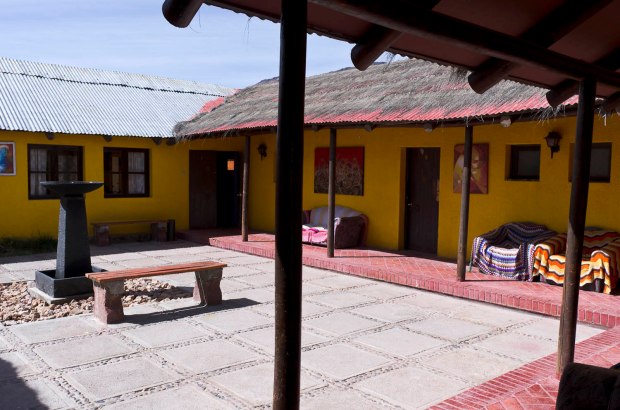 I highly recommend a stay at the Hostel Pachamama

Some photos from the adventure, including my highlight, petting a baby alpaca! 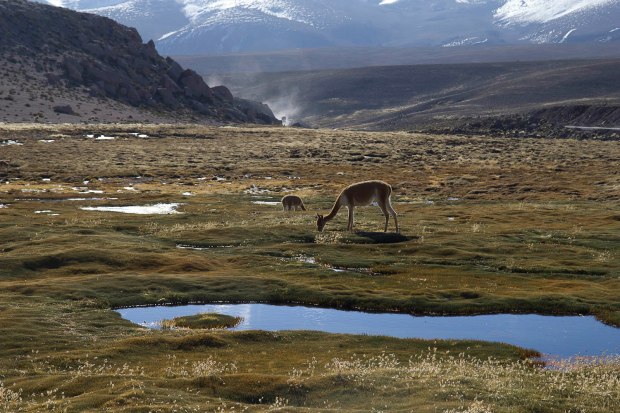 vicuñas, another type of camelid (like alpacas, llamas) are only found at high altitudes

alpacas love wetlands like these here. It’s one reason their fur is so soft 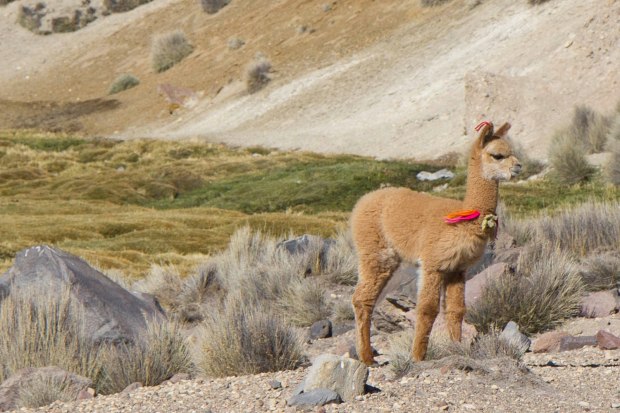 this little baby came right over to me and let me feel his soft fur!

Our last night in Putre, I prepared a big feast for our final dinner in Chile.  We met some great people at the hostel (and an old friend we met a few times) so we all ate together.  A fitting farewell,  filled with great people and good food! 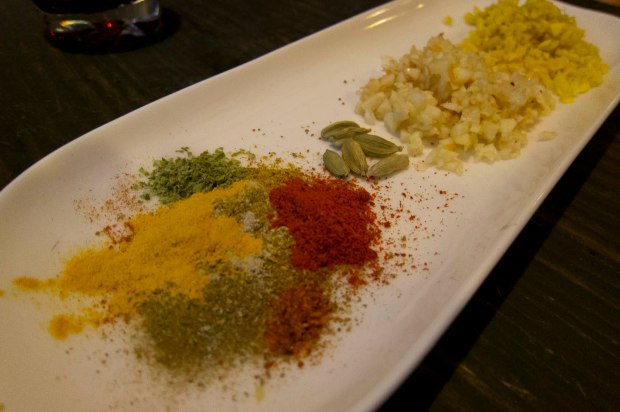 we turned this array of spices

into this vegetarian delight!

a fitting farewell with some good eats and great company

The next day we left Chile.  Or we tried.  Well, we succeeded in the end but it seemed like the universe didn’t want us to.  We had to go to the crossroads outside of Putre (about 4 km) to catch our bus to Bolivia.  Getting a ride to the crossroads was tricky and all morning we had no prospects whatsoever.  Finally about 10 am, we got a ride.  We thought we were in luck.

Our bus was heading to Bolivia and was supposed to pass the crossroadsof Putre around noon and indeed, finally we saw it coming around the bend.  There was a total of 4 of us waiting for buses, 3 of us on this one and 1 waiting for another bus company.  We flagged the bus down but the bus wouldn’t flag.  It approached rapidly and then we began flailing our arms in desperation but the bus only sped up!  It flew past us!  Great. Now we were stuck on the side of the road, far from the town with no bus (and we had tickets that clearly said that the bus should pick us up at the crossroads!).  Not a great start.

Thanks only to the other girl waiting because when her bus arrived, it actually stopped and picked not only her up, but us other 3 unfortunates too.  The only problem was her bus was packed and so we sat on the floor for the 2 hours to the Bolivian border.  A tad uncomfortable but no big deal, I thought. Hey, at least we got a ride.  We arrived to the border of Bolivia and I paid the $135 US to get my visa which was much more effortless than I thought it was going to be (thankfully).  We spotted our orginal bus (the one that flew past us) at the border and asked the driver why he didn’t pick us up.  He just shrugged.  Thanks a lot asshole.

Now we had to pay the other driver where we sat on the floor (in the aisle) and we had no more Chilean money.  So the other girl we were with paid for us, thankfully.  And we had to get all our bags and move into our proper bus.

Once on the correct bus, someone had naturally sat in our seats, and one of the people was a child sleeping.  Great. We didn’t want to be the evil people that woke the sleeping child so instead we moved along to the back of the horrific smelling bus.  The bus we were on, was on its way to La Paz, Bolivia.  But we weren’t.   We wanted to get to Sucre, which is more to the southeast.  We decided to get off at a town called ‘Patacamaya’ because it looked like a ‘hub’ area in Bolivia where we could ‘easily’ catch a bus to Sucre.

That all ended up being a laugh.  Never heard of Patacamaya?  Yeah, we haven’t either and we haven’t met anyone else who has!  No tourists go there.  And the bus, true to form, conveniently dropped us off at the crossroads of the ‘town’.  There were taxis there waiting to drive people to the ‘town’ but of course we had no Bolivian money because we just arrived.  So now we walked with all of our crap, after the day we just had, into the dusty streets (and I mean dusty) of Patacamaya.

We spotted a Western Union & luckily they changed 40 of our US dollars to Bolivian money.  We inquired where the bus terminal was.  That was a joke.  The ‘bus terminal’ was non-existent. The buses merely passed by on the streets with dozens of locals clamoring to get in one that didn’t even stop, buses here only slowed down and you had to jump in. Umm…no thanks.  The other option was over-crowded mini-vans that would take us to the next town.  We tried to get into one of those.  The vans were all packed.  The locals pushed.  We had all of our crap.  The sun was setting.

I begged Laurent to just stop trying and we could just try to find somewhere to spend the night.  Finally, after trying for almost 3 hours, we stopped and found a place to stay.  By a place, I mean a crackhouse.  Okay, so I’ve never really been in an actual crackhouse but this place was what I imagined it might be like.  Toilet water all over the floor, black sinks, sunken beds with holes in the windows.  Gross.  I pulled out my sleeping bag and crawled inside wishing we were already back in Chile.  I don’t know what was worse, the day we had just had or the fact that we had to get up early and do it all over again the next day!

The next morning we woke up early, packed up all of our stuff and headed out to brave the ‘scene’ again.  We got lucky.  Within 20 minutes we were sitting in the back of a minivan made for 6 or 7 people maximum, at times we were maxed out to 13.  This was followed by another 6 hour bus ride with a screaming, throwing up child directly behind us and the worst Spanish music I ever heard blasting in our ears.  Finally after that ordeal, we arrived at a bus that would take us to Sucre.  A few hours later, we were there!  Welcome to Bolivia!