After 3 weeks of Spanish lessons, we were ready for a break.  One of my very best friends decided to take a trip to Bolivia to visit us and it just so happened to be during my birthday week!  This made me very happy-our first friend to come and visit us!  It was hard deciding where to bring her but finally I thought it would be nice for her to see some of the altiplano (high altitude) Bolivian landscape (after all, she loves treeless, barren, beautiful landscapes as much as I do!).  And so we booked a 4 day Jeep tour to the Salar de Uyuni, which just so happens to be the largest salt flats in the world. 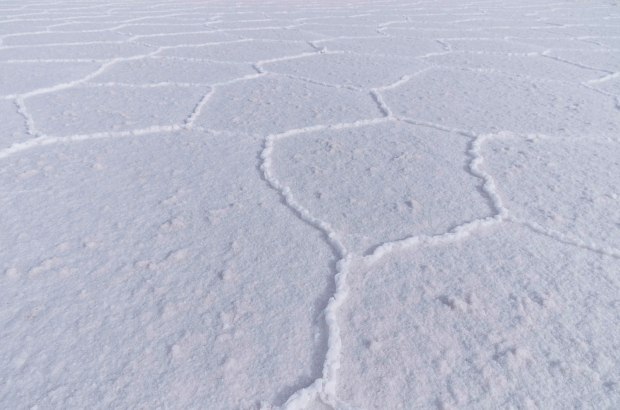 the salt crust forms hexagonal type patterns across the Salar

These salt flats contain over 64 million tons of salt (!) and are over 4,000 square miles (10,000 + sq km).  Just how did these large salt flats come to be?  They formed because many thousands of years ago the area was actually a giant pre-historic lake and because the area is surrounded by mountains, there was no outlet for the water to drain.  When the lake dried up, it formed a thick crust of salt serving as a natural source for this important element.  But there is not just salt on the salt flats.  Beneath the surface, the area is very rich in lithium.  The Salar de Uyuni contains up to 70% of the world’s reserve which is in the process of being extracted.  And when they say flats, they mean flat.  The salt flat is so level that the surface is used to calibrate the altimeters on board satellites! 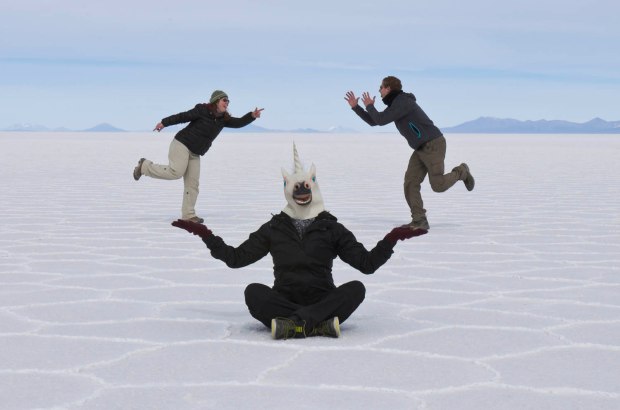 There really is no other way to get to the salt flats other than hiring one of the many Jeep’s that offer tours through this area.  There are a slew (& I mean a slew) of companies to choose from.  Our search was made a little easier due to a couple that Laurent knows.  They took the tour prior to us and did a lot of exhausting research.  They keep up a blog as well and they are a bit fussy (they’re French for crissakes) and so we trusted them when they recommended ‘Ciudad del Encanto’ tour company. 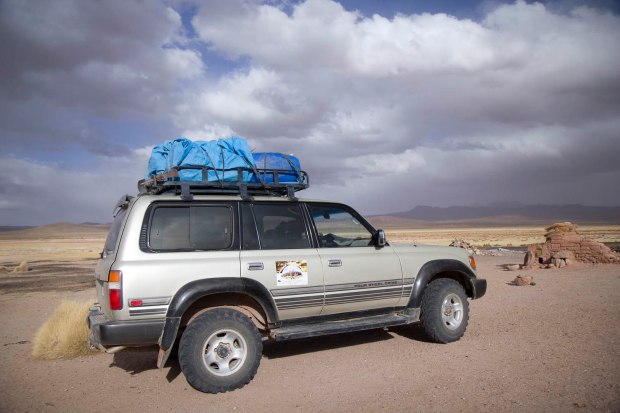 The company is small, family run & located in a town called Tupiza, in the south of Bolivia.  We stayed 2 more days in Sucre with my friend and then took a long bus to Tupiza.  There we encountered our first Bolivian road block.  When you meet other tourists that have come through Bolivia or you read the Lonely Planet or other guide books, they will warn you of a few things about Bolivia:

-You will probably get some sort of food-related illness during your visit to this country (it happened to me twice so far….)

-Don’t drink the water (bottled all the way, even though I feel heaps of guilt from using all the plastic, especially since Bolivia lacks recycling-it’s worse than Long Island!)

-Beware the fake policeman who will try to scam you by asking for your passport and then proceed to rob you.  (they also work in cahoots with ‘fake tourists’)  Luckily this hasn’t happened to us yet but I’ve had friends where it has.

-At some point you will encounter a human roadblock of Bolivian protesters that may or may not hold you up for a week or more.

So here in Tupiza we had the roadblock but not the wait.  There is much civil unrest in this country and people are…well….basically they are pissed off about any number of things.  So the people band together and form a human barricade at the entrance to towns thus blocking any form of transportation from entering (or leaving for that matter).  Not very fun for us tourists.

Fortunately this time, we could just hop in a taxi cab (taxis are often waiting after the line of human protesters to take advantage of this money-making opportunity) and get a ride to Tupiza which was only about 1o minutes away.  Not bad.

the heavily eroded, breathtaking landscape just outside of Tupiza

Once in Tupiza, we spent the night at the hostel associated with our tour company and they gave us a briefing on what to expect.  We were lucky to have a friend that we had met while hitchhiking the Carretera Austral join us on the tour.  So that made 4 of us total for the Jeep: Laurent & I, my friend and the guy we had previously met.  In addition to our little group, you have the driver who is the guide (but who really is just more of a driver) and a cook (in this case, it was his wife). Basically, the tours all run something like this: 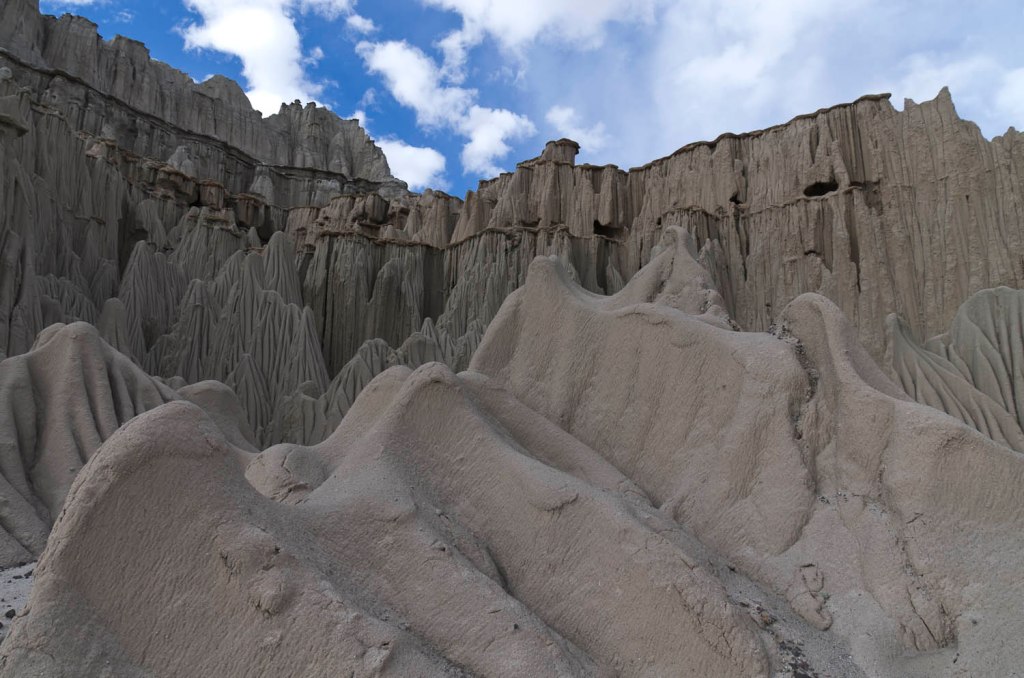 the first day we visited the namesake of the company the ‘ciudad del encanto’, which translates to ‘charm city’

You depart from Tupiza which is located at just above 10,000 ft (3,160 m)in the morning (around 9 am) and drive all day long, passing amazing scenery & countless photo opportunities. All of the landscape is at high-altitude sometimes going up as high as 19,000 ft (6,000 m).  Luckily no one in our group had any problems with the altitude, although we all chewed coca leaves.

To chew the leaves, you start with one leaf placing it inside your cheek and then add the other leaves one by one (anywhere between 15-20 leaves at a time).  You don’t actually chew them, you just keep them in the inside of your cheek.  When you add a small piece of bicarbonate, saliva will build up and you just kind of continuously swallow the saliva down.  Not the most pleasant thing, but it really does stave off hunger (probably because it tastes so bad!) & is supposed to help with altitude adjustment.

Coca leaves are a huge part of  the Bolivian culture (miners often chew copious amounts to ward off hunger for the day and to give them energy to keep working) and they are also used to prevent altitude sickness (there is documented scientific evidence).  Coca is also chewed by almost all the people of the campesinos (farm workers)-both Aymara or Quechua. These leaves have been used for medicinal or religious reasons since pre-Inca times.  They are either chewed (like I described above) or in tea form as mate de coca.  Yes, it’s true the crude leaves are used in the making of cocaine but it takes a lot more than just the leaves to make the drug (toxic chemicals plus lots of processing).

coca leaves drying out on the street

Since the 1980’s, the  paranoid US government has funded Bolivian police huge amounts of money to kill thousands of coca plants with aerial spraying or uprooting especially back when the ‘war on drugs’ was in its height.  This damaged thousands of plants as well as the soil.  This is absolutely unacceptable and in a way, I don’t blame the Bolivians for being a little upset with the US.  These leaves are a huge part of their culture and destroying these plants is like uprooting a part of their identity.  And in an ironic twist, Coca-Cola imports the coca leaves (for the sole purpose of flavoring) from Bolivia to this day in their popular soda!  This article has more information on the Coca-Cola ‘conspiracy’.

Our first day was made a bit special by this specific tour company because they are the only ones who spend some time in the Ciudad del Encanto (which translates to ‘charm city’)-an amazing natural formation (and small village of the same name).  We got to spend about 2 hours here walking among the white, wind-eroded structures.  And then it was back to the Jeep for another bumpy, dusty (the dust was everywhere!  In the car, in our noses!) ride over the amazing landscape. 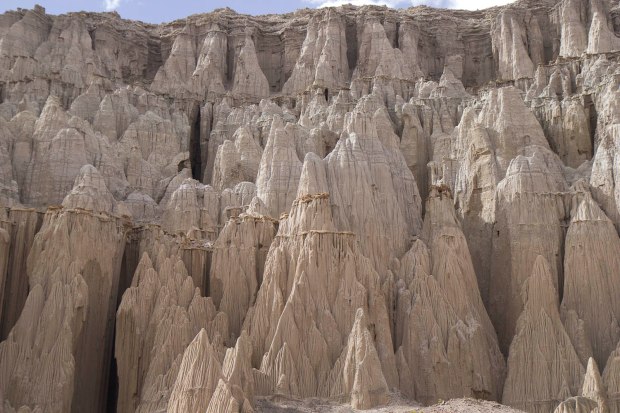 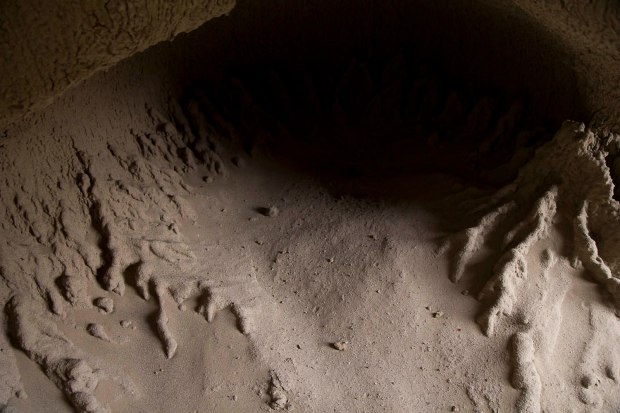 we could crawl in and enter the structures

we even found a unicorn inside one!

We ate lunch in the Jeep on the first day and I got to try my first llama tamale, a specialty of Tupiza: 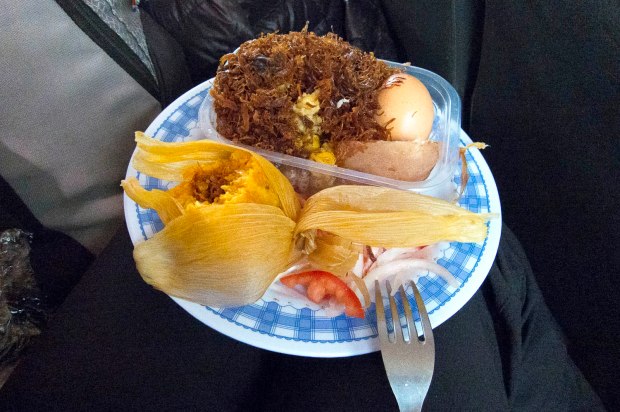 Charque or Charqui (or in Quechua, Charki) is a type of salted and dried meat very similar to jerky.  In Bolivia you will usually find it made with llama meat but in Peru, alpaca is quite common.  They cured the meat as a method of preservation, (very common in Bolivia) so that they could store the food for a long time.  In Bolivia, llama charque is a specialty of the Potosi region and you will only find the llama tamales made with charque, in the Tupiza area.

We drove over dusty roads for the remainder of the day and spent the night in a thatched roof house:

an example of some of the thatched house roofs common in the countryside,  this one complete with pet llamas

There was no heat, no electricity and of course, no shower!  But that was okay, we knew what we were in for.  Our cook prepared a basic dinner of hamburger-type things (the soup was good at least) and then we went off to bed.  It was pretty cold at night but we all had sleeping bags and my very good friend brought us these kind of hot water bottles that old grannies usually use.  We put them in our sleeping bags for a cozy nights sleep.  I highly recommend bringing these if you are thinking of taking this tour!